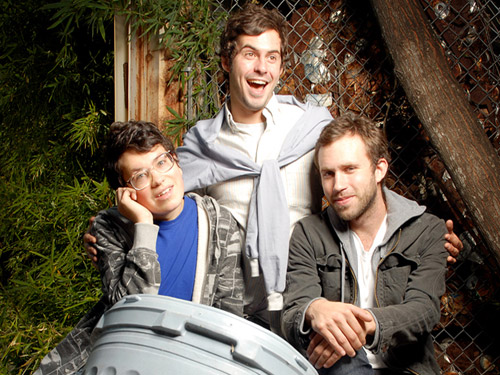 Gathering up the courage to ask someone to senior prom is one thing, but actually attending is a whole different nightmare. The VHS footage of a late-’80s prom featured in the video for White Denim‘s “Street Joy” captures many of the timeless fears that keep some high-school kids from bothering in the first place: the awkward fumbling through slow dances, the constant fretting over cheap plastic tiaras, the musty smell of sweat-soaked rented tuxedos. Who needs that kind of misery? (After all, senior prom is an event primarily defined by disappointment. That stretched limo isn’t taking you away from your worries, or your parents, or the drudgery of life in the suburbs; it’s only taking you down the street to your high-school gymnasium, where a few haphazardly arranged garden lattices and drapes are supposed to add a sense of glamor to the otherwise familiar surroundings.) But maybe, if a band like White Denim had actually been on stage—instead of just spliced in with the original footage—it would have been a slightly less painful-looking experience for everyone involved. In fact, after watching the Austin trio-turned-quartet’s latest video, it feels almost as if that youthful nervousness and naivety was the most beautiful part of that night back in 1988. (It certainly wasn’t the haircuts.) White Denim performs with Mazes, The Static Jacks at 9 p.m. at Johnny Brenda’s; tickets to the 21+ show are $10.