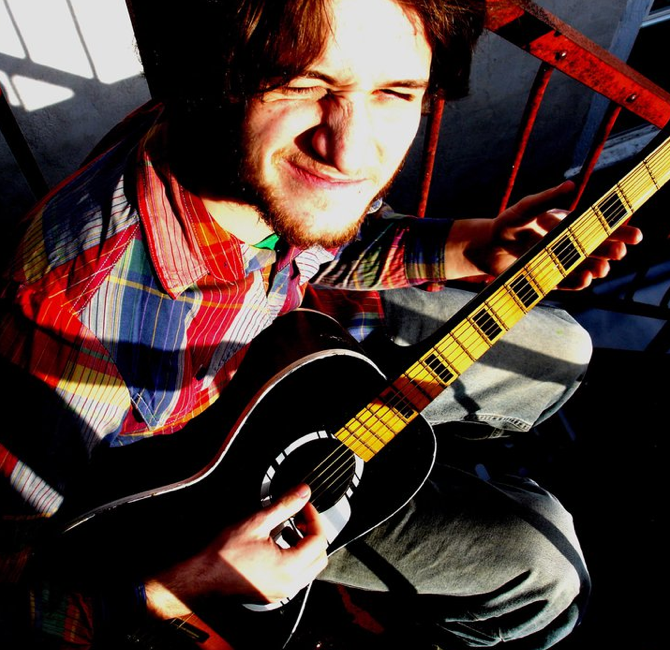 There should be laws against excessive iPhone usage at small, seated shows. World Café Live’s Upstairs venue has a quiet, settled ambiance to it: the Christmas lights, the guttering candles, the muted chatter. It’s not the sort of space that encourages much beyond polite clapping, even when it’s packed. On Tuesday night, with the room barely half-full of indifferent and furiously texting patrons, Peasant—the alias of Doylestown singer-songwriter Damien DeRose—faced a challenge just in winning the crowd’s attention.

As it was, DeRose had to fight for recognition for the entirety of his 30-minute set, with brief interludes of respectful silence when the band’s volume dipped below conversation levels. “These are new songs,” he said at one point. “But it’s not like any of you look like you’ve been to a Peasant show before. It’s different, you just have to believe me.” If the crowd heard him, they gave no sign.

DeRose normally packages his brand of simple, romantic Americana as an acoustic, solo affair, which explains why he seemed so uncomfortable with a three-piece band backing him and an electric guitar in his hands. “I’ve never had a band before,” DeRose said. “Not sure if I like it.” It’s true; they could’ve used more rehearsal time (after new song “Glory Bound,” Derose quipped, “that one’s bound for a little more practice”), but overall the music was better for the added instrumentation (drums, bass and keyboards).

A second vocalist might have improved things further. DeRose’s wistful voice is lovely by itself, but harmonies could lift it to commanding new heights. As for the crunch of the electric guitar, which DeRose declared “fun,” he’d be better off without it. It only served to muddle, and the tunes Peasant played electric were the least interesting. When he adjusts to sharing the stage, that could change, but for now Peasant is still at his most affecting when he’s standing alone under a wash of yellow light, strumming an acoustic. “We’re Good,” from his most recent release, 2010’s Shady Retreat, was a stand-out.

“Did you ever pine for somebody?” DeRose asked at the opening of his set, prefacing a sorrowful, lilting song. But if he was pining for anything on Tuesday, it was probably an enthusiastic—or at least considerate—audience. Here’s hoping he gets that next time he plays in Philly. Peasant deserves it.