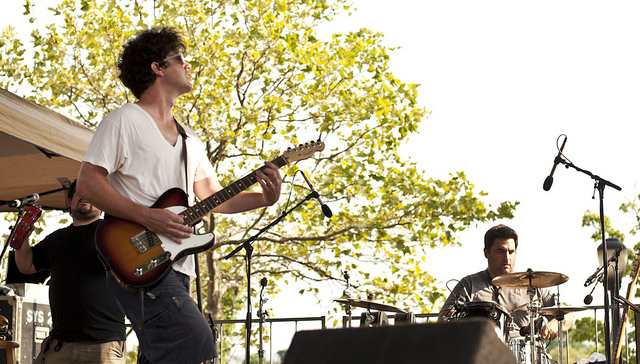 Yesterday, Johnny Miles And The Waywards officially kicked off this year’s XPoNential Music Festival, performing an opening set in the brisk 100-degree weather. Back in March—when we posted our Key Studio Session with the band—XPN2’s John Vettese said, “The South Philly/South Jersey six-piece evokes dusty travels and self-discovery in its music, which ranges from boisterous (love Carl Cheeseman’s lead guitar lick on ‘Hanging On To The Hoping’) to contemplative (keyboardist Nate Gonzales rocked an admirable accordion on the breathless ‘Sailors’).” Yesterday, the band needed no help in evoking images of parched travelers wandering along dusty roads; as far as self-discovery goes, well, hopefully they discovered the beer garden next to Marina Stage immediately after the set.

You can listen to the audio of the full performance here; videos can be found here.