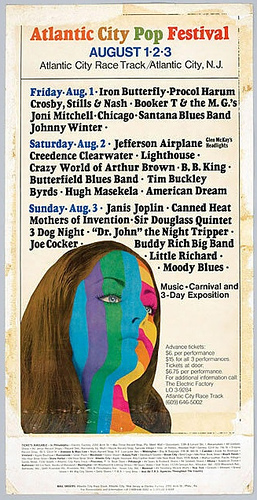 This week in music history: The Atlantic City Pop Festival

You’ve obviously heard of Woodstock, but did you know that just two weeks before the legendary Aquarian Exposition, a festival of somewhat similar proportions occurred just east of Philly? The Atlantic City Pop Festival was a three-day event, taking place on August 1, 2, and 3 of 1969 at the Atlantic City Race Track. Attended by over 100,000 people, the festival featured an epic lineup of performers, including Booker T. & The M.G.s, Chicago, Joe Cocker, Creedence Clearwater Revival, Jefferson Airplane, Janis Joplin, BB King, Little Richard, Joni Mitchell, Santana, and many more. The event cost $15 for a 3-day pass, a nice $235 difference from this year’s Bonnaroo ticket price. Although organizers did modest promotion and were expecting mostly local attendance, people came from all over the east coast to experience the huge lineup. The festival is widely considered to be the one of the first outdoor festivals of its magnitude, and a stepping stone for Woodstock. As the AC Pop Festival celebrates its 42nd birthday this August 1-3, check out these videos from two of the great artists who performed.