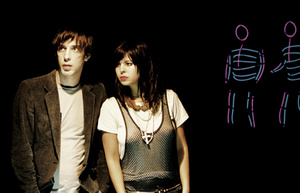 FRIDAY, AUGUST 19
As far as husband-wife indie bands go, Handsome Furs might be the best to dance to. The Canadian duo, composed of Dan Boeckner (formerly of Wolf Parade) and his writer wife, Alexei Perry, make indie pop heavy on the synths and keyboards. With their latest album, this year’s Sound Kapital, they’ve moved even further toward electronic beats that are dance-floor ready. More than that, the pair’s recent trip to Burma, (where they witnessed the local acts who played in constant fear of the authorities), inspired the lyrics and heart of the album. For a night of grooving with a purpose, buy a ticket to the Handsome Furs show. Handsome Furs perform with Thee Satisfaction at 8 p.m. at First Unitarian Church; tickets to the all-ages show are $12–$14. —Kiley Bense

SATURDAY, AUGUST 20
Combine riff-heavy classic rock with the psychedelic and blues-y elements of stoner metal, and you could easily find yourself listening to Nazareth, PA’s Pearls And Brass. In a way, it’s rock and roll in its most basic sense, a return to the essential elements that garnered superstar groups like Led Zeppelin their success. Together since 2001, Pearls And Brass have only released two LPs, their most recent being 2006’s The Indian Tower. That album was released on Drag City, who picked the band up after seeing them perform at All Tomorrow’s Parties Festival in 2005. The trio rarely plays at larger venues anymore, so check them out tonight if you’re interested. One word of advice though…stoner metal often does not translate to the best music to listen to while stoned (i.e. “these guys need to chillll”), so it may be preferable to save the toking for your after party. Pearls And Brass performs with Purling Hiss and Serpent Throne at 9:15 at Johnny Brenda’s; tickets to the 21+ show are $10.