Interview: Jen Sperling, Casey Bell, and Dan Morse of Break It Up - WXPN

Interview: Jen Sperling, Casey Bell, and Dan Morse of Break It Up
Artists

Interview: Jen Sperling, Casey Bell, and Dan Morse of Break It Up

Break It Up has yet to play its first official show as a band, but it’s already one our favorite new local acts. Just last week, the trio—which features Jen Sperling (ex-Conversations With Enemies) and Dan Morse (current Wigwams) on guitar and vocals, and Casey Bell bell on drums—released its debut song via Bandcamp. The song, titled “Excavate,” is a guitar-driven, hook-laden throwback to some of the band’s ’90s indie/riot-grrrl influences—and it’s been on steady rotation here in the office since we first heard it. Prior to Break It Up’s inaugural performance (this Sunday night at Kung Fu Necktie with Sub Pop’s Male Bonding), The Key spoke with the members of the band about the their musical roots, getting out of one’s own comfort zone, and the importance of a having a good editor.

The Key: So, Jen—before forming Break It Up, you and Casey played together in the band Creatures Of Prey, correct?

Jen Sperling: You dug up Creatures Of Prey, did you?

TK: You mentioned it in an email.

TK: Specifically, you said that Break It Up “actually started as an all-female five-piece super-group that played under the name Creatures Of Prey.”

Casey Bell: I had put an ad on Craigslist looking for other female musicians with the goal of starting an all-female band. Jen was one of the first people who responded, and we hit it off immediately. We had a musical chemistry, and both of us had wanted to start an all-girl band. With Creatures Of Prey…we were playing music with our friends and it was a lot of fun, but we hadn’t found the direction that either of us wanted.

JS: Individually everyone in Creatures Of Prey was incredibly talented, but as a group our creative process was always to keep adding things on. So when we recorded, we specifically asked Dan to come in with fresh ears and help us focus that tendency. It was definitely a turning point for us to have someone taking on that critical role of “editor,” but it was more that he proved to have a gift for removing extraneous bits and moving things around…We lost some members around the time we were recording with Dan, and he had such great ideas, we asked him to join.

TK: What were some of Dan’s “great ideas” in the studio?

CB: [Laughs] Dan’s just a really great songwriter. Songwriting, simplifying, and getting to the point in a really interesting way. I feel like we kind of have a tendency to meander.

JS: One of Dan’s strengths, from my perspective, is as an arranger. When he was recording Creatures Of Prey, he was acting more in a producer role. The one song that carried over to this band is a song called “Architect,” which Casey actually wrote on guitar. It was more of a folk song almost. It was a lot slower, and it kind of meandered a little bit. And Dan had some ideas to turn it more into of a, uh, rock anthem. [Laughs.] Well, maybe not a “rock anthem.” It’s a rock song, but it’s definitely one of the more ballad-y songs that we play. And it’s always a lot of fun for us to play it for that reason. I don’t know. What were your great ideas, Dan?

JS: We all have talents in this band. With Creatures Of Prey, we really wanted everyone’s great ideas in every part all the time. And I think that there’s a lot more editing now that it’s just the three of us. It’s a smaller group. There are fewer opinions, and more decision making…And by working together we discovered that we liked and respected each other’s talents and could help each other grow as musicians and songwriters. So at a certain point our all-girl aspirations just became irrelevant, because we were writing music that we felt excited about and compelled by—which is why we had started Creatures Of Prey to begin with. The open, collaborative environment we value has been maintained; we’re just writing much more concise songs.

TK: The track “Excavate” was recorded with Jeff White (who’s also worked with The War On Drugs and Nightlands). How many songs in total did you record during that session?

DM: We recorded five songs… Jeff was a big help. Because, unlike me, he actually knows what he’s doing. I’m just, like, some studio savvy musician, if you will. Or not so savvy. [Laughs.] He helped a lot, especially with tracking the drums. He had a lot of nice microphones and pre-amps and everything. I was just pleased to be in the same room with all that stuff. His style actually overlaps a lot of what we all like, which is going for a late ’70s kind of recording style. You know, before people starting adding a lot of reverb to snares and things like that.

TK: Are you releasing a single or an EP? Or are you holding on to those songs for a full-length?

DM: We didn’t want to wait until we were able to finish all five songs, so we released the one that was fully finished. We’re hoping to finish the rest soon. We’re kicking around different ideas of releasing one every so often. I would love to eventually put out an LP. 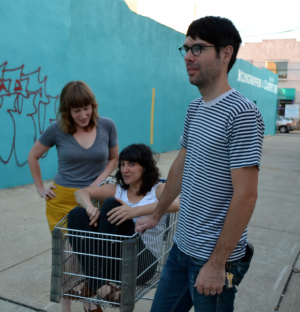 TK: Jen, you mentioned in an email that you’re originally from the D.C. area—you were born and raised in Arlington, VA, before leaving in the mid-’90s. How active were you in the D.C. scene during your time there, and which parts of the scene were you most active in?

JS: I guess there were a couple. When I was 13, 14, 15, I was involved with Positive Force. I went to meetings. I also went to a lot of shows with riot grrrl bands, that whole scene. And then probably around 16 I became straightedge. I got really into the straightedge hardcore scene in D.C. And I remained straightedge through college. I think whatever part of the scene you were in, it was a really fun time to be involved with music, any kind of punk, DIY music. There was a lot of vibrancy there. A lot of activity, a lot of shows, a lot of really interesting people. I’ve kept in touch with some of them, and I really think a lot of those people are still doing interesting, creative stuff. It was a really great network of people to grow up with and become politically aware with, to share ideas and engage with.

TK: And Dan, you were in D.C. for a while after Jen originally left?

DM: I was there for six years, from 2000-2006. It was a very formative experience for me. But it was also more complicated. I came from a pretty political DIY punk scene up in Massachusetts. So when I was going to move somewhere else, I thought I’d go to D.C., because that was the capital of that kind of stuff, you know? Not just the capital of the country but the capital of that whole DIY punk thing. I actually went there to study politics—and then the 2000 election happened. [Laughs.]

DM: Not that D.C. made me less political, but it did give me a much different perspective. At the same time, I think I went there with the idea that D.C. meant you were DIY in exactly the same way Fugazi was. That still inspires me now, but I think the cool thing about when I was down there was it was a small city, but there was a lot of diversity in the music scene. So, on the one hand it seems like the kind of obvious place for political punk rock. But what is actually more interesting to me is how the DIY ethic crossed over into other genres.

TK: Having spent a number of your formative years in music scenes from other cities, what is your take on making music here in Philadelphia, right now?

JS: I’ve actually bounced around to Seattle, New York, some other places. Casey lived in Chicago previously…For me, Philly holds up really well. There’s a lot of diversity here, a lot of people making different kinds of music. The scene is big enough for everybody, but it’s also very affirming. I don’t feel like there’s a lot of intra-Philly competition. I feel like if a Philly band is successful, everyone is happy for them. And I like being a part of a scene that feels like that.

TK: There’s a line in Break It Up’s press release that says, “Break It Up remains loyal to the sounds that made them fall in love with music in the first place,” and specifically cites “a post-riot grrrl ethic” and “’90s rock roots.” What keeps you loyal to those roots as time passes?

CB: I grew up feeling like I had to fight a little harder to have my voice heard. And then discovering riot grrrl music—and identifying so much with that, feeling liberated with that and connected to that. I remember what it was like to discover bands like Bikini Kill and L7 and Heavens To Betsy. And that was really a life-changing discovery for me. Regardless of the type of music I play, I will always stay connected to that feeling of that music.

TK: Right after that line in the press release is another that states the three of you “approach each song as an opportunity to push back against the comfort of the familiar.” As musicians, how difficult is it for each of you to combat your own musical tendencies? How regularly do you find yourselves slipping into your own comfort zones?

JS: That’s one of the reasons I love playing with other people. I’ll be at home alone with my guitar and I’ll start out with a riff, and it’ll sound like the same old Jen Riff. But I’ll bring it to practice and play it for everyone else, and someone will suggest, “Why don’t you play it this way?,” or “Why don’t you change the rhythm up here?”

DM: For me—and I swear this is not self-promotion—it helps to have multiple projects simultaneously.

TK: Are you hyping up your other band, Wigwams?

DM: Well… [Laughs] Honestly, though, it’s nice to go from one band one night to another band the next night. It’s a different setup, a different sound. And it pushes me in that way.

CB: One of the most enjoyable things about this band is that there is a free flow of ideas. I don’t think any of us are afraid to say no to each other if an idea isn’t working. It’s OK to say no and not have the other person feel wounded or personally criticized. We’re really at a point now where we’re able to communicate in an efficient way.

DM: Another thing I really like about this band is that all three of us are songwriters. Casey plays guitar, too, and is just as involved in songwriting as Jen and I are. It’s a group effort. It’s also a relief—it takes the pressure off me to write guitar parts. [Laughs.]

TK: Speaking of which, Break It Up is just two guitars and drums?

TK: As a bass player, I have to ask: What have you got against bass guitar?

Dan: It’s just bass players we have a problem with.

TK: Dude, that is messed up.