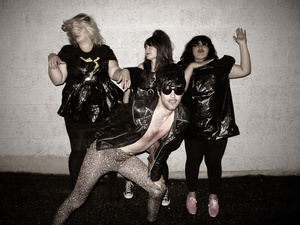 Tonight’s Concert Pick: Hunx And His Punx at Johnny Brenda’s

These days, Hunx And His Punx would probably be better off using the moniker Hunx And His Punkettes. Since early 2010, Hunx (the alias of frontman Seth Bogart) has led a backing band of female musicians on a retro-themed whirlwind. Taking ’60s girl-group pop and early greaser rock n’ roll as touchstones, his latest album, Too Young To Be In Love, is all about young love spurned and returned (and sweet vocal harmonies). It should come as no surprise that the album was recorded in the same studio once haunted by Ronnie Spector, an idol of Bogart’s. Too Young To Be In Love represents a cohesive and creative leap forward for Hunx and his gang. Hunx And His Punx performs with K-Holes and The Eeries at 9 p.m. at Johnny Brenda’s; tickets to the 21+ show are $10.