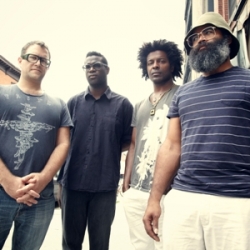 TV On The Radio has just announced the upcoming digital release of a new live EP, World Cafe Live, which will become available on September 6th exclusively on Rdio. The five-song EP (track listing below) is a live recording of the band playing a set at WXPN’s The World Cafe hosted by David Dye.

With just over a week before TV On The Radio’s scheduled appearance at the Mann Center, the band has also released a new video for “Second Song,” the opening track off this year’s Nine Types Of Light. Back in July, the band released a video for “Caffeinated Consciousness,” the closing track off the album. You can watch both videos below. TV On The Radio performs at 7:30 p.m. Friday, September 9th, at The Mann Center; tickets to the all-ages show are $35.40–$50.25.