Read the transcript of The War On Drugs' online chat with ESPN.com's SportsNation - WXPN 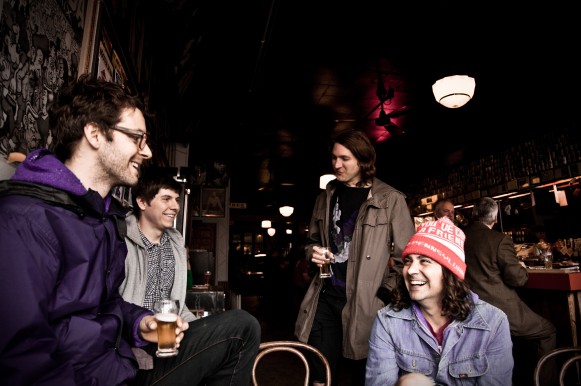 Read the transcript of The War On Drugs’ online chat with ESPN.com’s SportsNation

Yesterday we mentioned that several members of Philly’s own The War On Drugs were scheduled to appear on ESPN.com’s SportsNation for an online chat. As ESPN points out, Adam Granduciel, David Hartley, and Steven Urgo “are huge NBA fans, with Adam’s family having owned Celtics season tickets. He was at the Garden when Michael Jordan scored 63. Hartley’s got a great post game and loved Manute Bol. Urgo’s Pacers passion stems from using them on the old Nintendo and is upset Reggie Miller’s not a hall of famer.”

While on the show, the trio discussed the latest War On Drugs album, Slave Ambient, as well as comparisons to Bob Dylan and Kurt Vile’s basketball prowess. Below, you can read a few choice questions and answers from the chat; the entire transcript can be found here.

Patrick (Chicago)
Hartley, what’s your best move in the post?

Dave (3:24 PM)
Probably what I call the “Shake Shake Boom Boom”… it’s a hybrid between the Up-n-Under and Jamal Crawford’s Shake-n-Bake. It’s already been banned in Turkey and Italy… I learned it when our Sprinter broke down in Belgium and we were forced to crash at this YMCA; we played a lot of pickup there and Arvydas Sabonis’ estranged brother broke me down, and then built me up with the unstoppable SSBB.

Hobo Rowboat (Philadelphia)
Would you take on Tom Petty and his gang for a game of hoops? Winner gets Tom’s oriental carpet and Gibson Dove and Mike Campell.

Dave (3:42 PM)
If WoD beats the Heartbreakers in roundball, I WANT CAMPBELL TO CUT HIS DREADS AND DITCH THE FLORIDA HOCKEY JERSEYS. Cmon! Anyways, I think we would destroy them.. you have no idea how scrappy we are. We move more equipment than just about anybody (we all have two amps and regularly acquire house organs on tour) and that shit hardens you.. the last time Benmont Tench moved his own keyboard rig, Elgin Baylor was still running up and down the court in booty shorts. THE DRUGS IN 6

tony (milwaukee)
how do you guys survive touring during the playoffs when you are on stage most nights during the games?

Dave (3:44 PM)
It’s not easy, but we’ve been known to check scores mid-set and structure our days around catching key games. If the Pacers ever get deep in the playoffs, though (HA!), I’m worried that we’d have to get a TV by the drum monitor.

Dan (nyc)
“Slave Ambient” has been compared to music from Bob Dylan, Tom Petty, etc. Frankly, I can’t stand Dylan or Petty. However, I can’t stop listening to “Slave Ambient.” Do you think the comparisons are inaccurate?

Steve (3:48 PM)
Interesting question, Dan. See, The Drugs are really more about good ball movement and spacing, and neither of those artists really bring that to the table. Sure, Dylan had that killer explosiveness that could collapse a defense and Petty had a great two-way game, and they were great, but it’s really not the way we play basketball. We drive, cut, and kick until we find our man, and we always make sure no one’s slacking on their defensive assignments. Two totally different approaches.

Read the full transcript of The War On Drugs’ appearance on ESPN.com’s SportsNation.