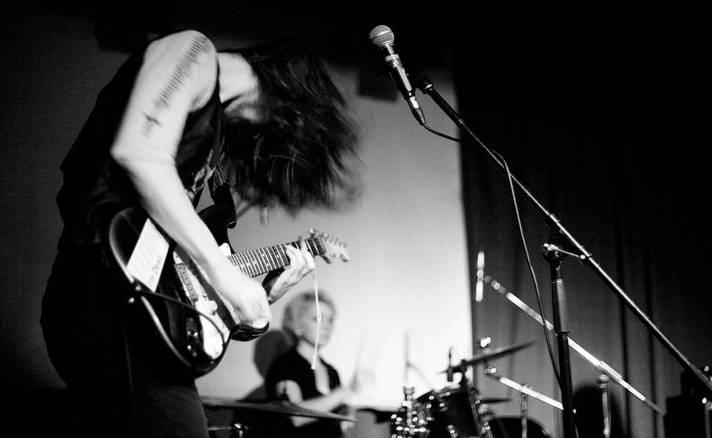 Back in early August, the members of the local rock trio Lantern—which was featured in a Key Studio Sessions post the previous month—asked their fans to donate money toward the band’s planned 2011 North American fall tour via Kickstarter. In exchange, the band offered an unreleased mp3 for every $1 pledge, a CD for every $10 pledge, a personally screen-printed t-shirt + CD for every $20 pledge, two limited cassettes + a t-shirt + a CD for every $50 pledge, and five lessons with guitarist Zachary Devereux Fairbrother (pictured above) for every $100 pledge. (By our estimation, all of that equals a pretty good return.) With more than a week to spare, the band has already raised $2,241 from 69 backers—$241 more than the original $2000 goal. So, earlier today, the band sent out a newsletter thanking the fans for their support, and letting them know about the upcoming tour—which will kick off Friday, September 30th, at Voyeur and wrap up on November 11th in Baltimore (full schedule after the jump).

We are overjoyed, we thought it might come down to the wire but thanks to you it’s not! It is a big relief to hit the road knowing you have a $2000 purse. Of course if you were thinking of donating and would still like to, please consider and visit the page! We could always use more and we have some great gifts! We are excited to be launching our own imprint as well called Mean Streets. For the $50 donation you get our first two releases;  the Bootleg of the Dirty Beaches/Lantern set from Glasslands  last spring and a collection of Zachary’s bedroom recordings from 2009 to early 2011 called, Burned Youth. Both are being burned to just 25 tapes and CD-Rs for now. So get those super limited tapes!

The trio also announced the release of its first 7″, which will come out on Mammoth Cave Recordings on September 30th and is now available for pre-order. The single features the track “I Don’t Know” (video by MIke Spano below) from the six-song Stranger I Come, Stranger I Leave cassette released earlier this year, with “Out Of Our Heads” on the B-side.

Lantern “I Don’t Know” from Mike Spano on Vimeo.