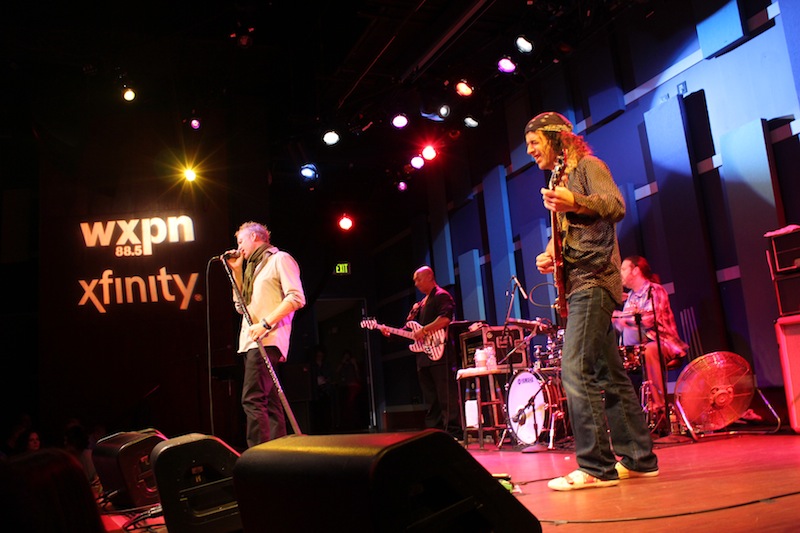 When Spin Doctors first began performing in the late ’80s, the members of the band were still in their teens, playing in frat-house basements at NYU and Columbia. In time, the band became popular in the downtown club scene, and was signed by Epic Records in 1991. The band’s first album, Pocket Full Of Kryptonite, was released that year, but another year would pass before anyone noticed. In the summer of 1992, radio stations started to play the song “Two Princes” over and over; Pocket Full Of Kryptonite went on to sell more than five million copies. Though the members of the band have suffered their own struggles in the years thereafter, they recently reunited to celebrate the 20th anniversary of their debut—including free concert this afternoon at World Cafe Live.

They’re not teenagers anymore, but you wouldn’t know it from their energy. Frontman Chris Barron sings with the same spirited optimism that distinguished his band from the angst-filled grunge sounds that dominated their early days. Clad in a blue shirt with a scarf wrapped around his neck, he seems plucked right out of the 1990s: between verses he executed deft boy band-esque dance moves, and showed a particular fondness for kicking his right leg high into the air—almost as if to say “I’m still limber, dammit, and we’re still making music.”

It would be a well-deserved declaration. Spin Doctors has seen a fair share of lineup changes over the years; most notably, guitarist Eric Shenkman walked off the stage during a 1993 concert and didn’t speak to Barron for seven years. But, as Barron repeated throughout today’s show, this band is the “original Spin Doctors”: with Aaron Comess on drums, Mark White on bass, Shenkman on guitar and vocals (he even takes the mic for “Off My Line”), and Barron at the front.

Spin Doctors’ music may not be the most groundbreaking or innovative sound, but it’s exactly the kind of honest rock’n’roll that deserved to sell millions of copies. The drums pump, the bass thumps, every song includes at least one mind-bending guitar solo, and Barron sings his time-tested hits as they ought to be sung: as if for the first time, every time.

Spin Doctors return to World Cafe Live at 8 p.m. tonight to play Pocket Full Of Kryptonite in its entirety; tickets to the show are $22-$42. —Seth Simons