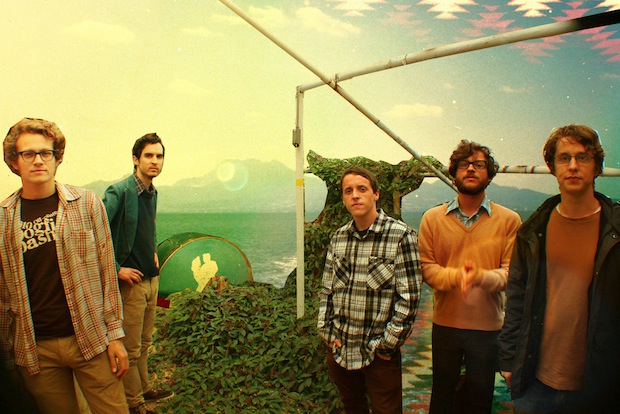 Direct from The Spinto Band‘s people:

Besides recording an album, the band has kept busy. Since the release of their 2008 LP, Moonwink, they have been spending their time building a studio, creating a record label, and dabbling in film-soundtracks. Firstly, the studio was needed to store their collection of musical instruments/junk that had outgrown parent’s basements and friend’s practice spaces. The band found an abandoned chicken coop and decided to invest in renovations for their own space to record Shy Pursuit. While in the space, the boys have recorded their own LP, as well as film scores for The Beast Pageant and Biba Democracy. They have also helped produce songs, albums, podcasts and video game tournaments, all of which have helped bubble a bit of a fun artistic community around the Delaware studio.

To add to the community, the band has been working on starting their own record label, Spintonic Recordings. The label is a natural step forward for a band that had self-released a dozen albums before the time they all graduated from high school. The first release on the label will be the soundtrack for Biba Democracy (December 6th), closely followed by Shy Pursuit and then the flurry of tour dates that will go alongside the music.