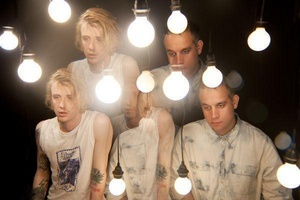 The songs on Girls’ 2011 album, Father, Son, Holy Ghost have as many mood swings your average teen-drama flick. With blunt titles like “Die” and “Vomit” accompanied by emotional ditties such as “Saying I Love You” and “Love Like A River,” you’d think the (male) San Francisco duo was trying to narrate some kind of bipolar disorder. Like on the group’s 2009 debut album, Album, band members Christopher Owens and J.R. White offer upbeat pop rock tinged with a vintage feel on Father, Son, Holy Ghost. Later tracks on the album, though, show the band exploring a more introverted sound, full of long, droning guitar solos and woe-is-me lyrics, evocative of an earlier Elliot Smith. Now on tour in the US and UK to promote their new music, the members of Girls will be bringing their multiple personalities tonight to the TLA. Girls performs with King Krule at 9 p.m. at Union Transfer; tickets to the all-ages show are $20. —Marielle Mondon