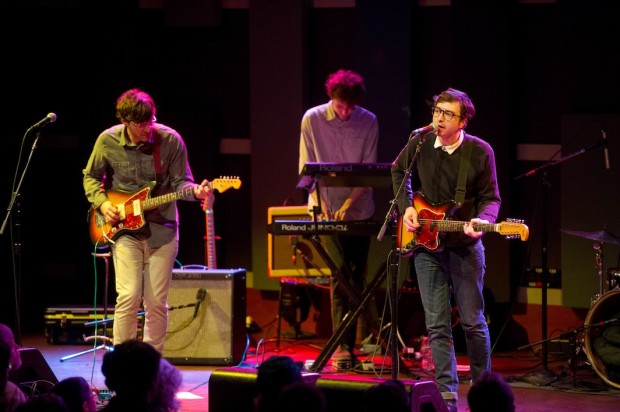 Real Estate’s sunny, relaxed sound spoke for itself at last Friday’s Free At Noon. Literally: The band members hardly said a word during the entire set. Instead, they played diligently from their new album, Days, while the audience stood nodding and toe tapping. Though the show didn’t inspire dancing, the new songs from Days moved beautifully. The album is a natural progression from the band’s chillwave debut, and it’s packed with lush, catchy tracks like “It’s Real” and “Out Of Tune.” The adjective “minimalist” seems to pop up in every critical review of Days, and it seems fitting to the band’s sound and performance.

Real Estate’s set up is fairly simple: a keyboard, two guitars, a bass, and a drum set. The band was originally formed by Martin Courtney, Matthew Mondanile, Alex Bleeker, and Etienne Pierre Duguay. The core members, Mondanile, Bleeker, and Courtney, met in high school and their beach-rock-packaged nostalgia for their younger days garnered immediate comparisons to the Beach Boys. The addition of keyboardist Jonah Maurer in 2011 was a big move for the group. The group also replaced Duguay on drums with Jackson Pollis last year. Despite changing its line-up, Real Estate hasn’t lost any of its warm, nostalgic charm. In fact, the members seem to have delved deeper into it. The group’s video for “It’s Real” features Courtney, Mondanile, Bleeker, and Pollis watching mock-archival footage of the three original Real Estate members playing with a beloved family dog that somehow seems to belong to each of the boys equally.

Real Estate’s commitment to revisiting the quiet moments of their friendship with understated, simple sounds makes it nearly impossible for the group’s performance to be exciting. Watching them is a bit like stumbling upon one of their high-school jam sessions. They communicate what to play with glances and nods, and the lyrics are nearly unintelligible. For the majority of their set, Real Estate seemed stuck down memory lane, with only a vague awareness that the audience wanted to join them. Real Estate’s dazed performance picked up suddenly, though, when they decided to play an encore for the audience at World Café Live after the show ended. They came back on goofy and conversational, as if they’d simply been shy in front of company. They talked about New Jersey, Fishtown, and the Giants. They decided to play a song they claimed they hadn’t played live in two years, and they sounded thrilled to be performing it. Real Estate closed the afternoon not with another sun-drenched song from Days, but with “Snow Days,” the polar opposite. Ending on a softer, more emotional track from their debut gave the audience a view into the deeper side of the group’s dynamic, and couldn’t have been a better note to end on. —Naomi Shavin