Tonight's Concert Pick: The Darkness at The Trocadero - WXPN 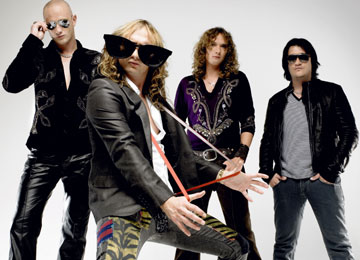 Tonight’s Concert Pick: The Darkness at The Trocadero

What has British glam-rock band The Darkness done for the music scene lately? The average person’s response would probably fall within arm’s reach of “nothing.” However, with an appearance in the new Samsung commercial that aired during Sunday’s Super Bowl, the public has suddenly been re-introduced to “I Believe In A Thing Called Love”—the hard-to-forget anthem, belted largely in falsetto, that inundated airwaves in 2003. Americans may have originally been caught off-guard by the oddities that The Darkness presented, what with its flamboyant fashion choices (patterned leather onesies and long, teased locks reminiscent of ’80s hair-metal) and trippy music videos. The band’s absence can be explained by a five-year hiatus that began in 2006 and concluded last year with an announcement about the band’s decision to reunite and tour once again. This random re-emergence is definitely a surprise, but if The Darkness can rise to popularity after five years in figurative darkness, anything can happen. The Darkness performs with Foxy Shazam and Crown Jewel Defense at 8 p.m. at The Trocadero; tickets to the all-ages show are $25–$27. —Lisa Henderson