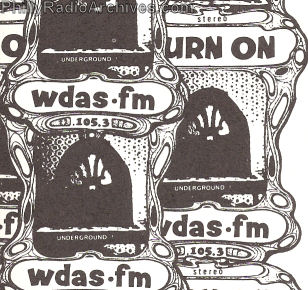 Stephen “Steve” Leon, the host of the progressive-rock era radio show “My Father’s Son” on WDAS in the late 1960’s, passed away last Monday, February 13th. He was 69 years old. Leon started the progressive rock radio show in 1968. When the station began WDAS had a mix of rock and classical music. While WDAS has become well known for it’s mix of R&B and soul music it has always been one of those “fabric of life” stations in Philly that introduced a lot of great music and DJ’s to the city. Georgie Woods, Ed Bradley, Patti Jackson, Tony Brown, Jimmy Bishop, Joe “Butterball” Tamburro, Harvey Holiday are just some of the legends to have graced the airwaves at the station, which for years has been a pivotal media outlet and voice for African-Americans and local community causes and needs. Before station owner Max Leon made the decision to change to an “urban” music format, ‘DAS caught the FM progressive radio wave in 1968. Here’s the historical snapshot of ‘DAS during that time, according to the Philadelphia Radio Archives site:

In the spring of 1968, the station switched to a progressive rock format under the direction of Hy Lit, who had just left a long stint at WIBG. Known as the “Hyski Underground,” the station played mainly album cuts and included DJs Michael Tearson, Ed Sciaky, Gene Shay, Larry Magid, T. Morgan, Wayne Joel, Steve Marko, Rod Carson and the owner’s son, Steve Leon, who called himself “My Father’s Son” on the air.

Rival WMMR-FM switched to a progressive format around the same time and started pulling in listeners from WDAS. Eventually, the station’s programming was turned over to Steve Leon by his father Max with the promise of complete freedom of speech and music. The promise did not last long. On March 5, 1971, the FCC (supposedly under the influence of the Nixon administration) issued a public notice that warned broadcasters against playing songs “tending to promote or glorify the use of illegal drugs.” Max Leon and his son-in-law, GM Robert Klein ordered all “dope songs” off the station. 28 year-old Steve fought against this ruling, and in an infamous altercation was taken off the air and fired by his brother-in-law while playing Arlo Guthrie’s song about marijuana “Comin’ Into Los Angeles.” The next day, the station launched a “progressive soul” format.

Writing about Leon article in this 2001 article about “The Golden Era Of Philadelphia Radio” in the Philadelphia Weekly, Tim Whitaker – former editor of the paper and now Executive Director and founder of Mighty Writers – had this to say about Leon’s show:

Leon’s program quickly became the most surreal in Philadelphia radio history. My Father’s Son said whatever Philadelphia’s counter-culture was thinking at the time. He’d talk for 20 minutes about the evils of the war and big government. He would rail against Rizzo. He’d announce Philadelphia street prices for pot and hash. Once, during the lottery that would determine which 18-year-olds would be drafted to go to Vietnam, he read the numbers on the air with machine gunfire playing in the background. Leon was suspended from WDAS many times for crossing the line of good taste, which was part of the fun of listening to him.

While “My Father’s Son” only existed a few years on the radio it was significant in the birthing process of a classic era of Philly rock ‘n’ roll radio history.