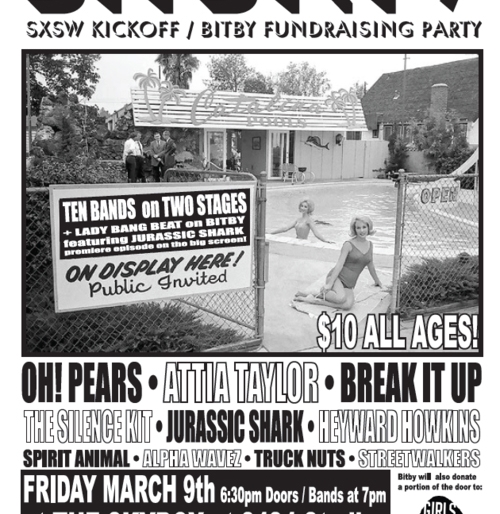 Streetwalkers occupies a great space for lovers of late-’80s/early-’90s dream pop: the Philly five-piece can drift all blissfully like Slowdive, and then wail and rumble like they’re lost in Disintegration. Below, you can download the band’s latest single, “Song Eight” (this is one group of musicians that doesn’t overthink its song titles), which was recorded this winter with versatile Philadelphia producer Jeff Zeigler. If its beguiling tones pique your interest, you can catch Streetwalkers in concert tonight—it’s playing an all-ages show at Studio 2424, sponsored by Bands In The Backyard. (BITBY’s Kyle Costill plays keys in the band.) The show is a dual fundraiser, both for the video-blog’s trek to Austin next week for South By Southwest (WXPN and The Key are co-presenting BITBY’s showcase on Thursday, March 15) and for Girls Rock Philly. The bill is jam-packed with favorites of The Key—Oh! Pears, Attia Taylor, Break it Up, The Silence Kit, Heyward Howkins, and more—and the BITBY gang will premier two new videos at the event as well. Streetwalkers plays the BITBY SXSW Kickoff tonight at Studio 2424, located at 2424 East York Street. Admission to the all-ages show is $10 at the door, music begins at 7 p.m.