Last night, Philadelphia’s SoFAR Sounds chapter welcomed Wilmington indie-poppers The Spinto Band, London folk-rockers The Brute Chorus and Philadelphia poet K.P. Brown to a living room in Olde Kensington. This is the third installment of the new house concert series – which has previously featured sets from The Lawsuits, Peasant, Alessi’s Ark, Lightning Jar, The Spinning Leaves, Hezekiah Jones and spoken word artist Ms. Wise. The night drew a bustling crowd, both players in the Philly music scene (ubiquitous hip-hop artist Kuf Knotz and North Star Bar programmer Andrew Miller were in attendance) as well as curious music fans. But the very act of calling it a “house concert” might be selling SoFAR (Songs From a Room) short. Performances were streamed live on the internet, and documented by a video crew for an archive on the London-based organization’s central website. The operating philosophy is unconventional as well. It doesn’t actively advertise; you have to like its Facebook page to find out the date and time of the next event, RSVP for the location, and typically don’t know who’s performing until you arrive. Victor Gennaro of Philadelphia rock outfit Mountjoy was the evening’s MC (it was his house the crowd was filing into) and while he got the show underway, The Key spoke with Carolyn Lederach, regional coordinator of SoFAR, about the program’s underground approach to supporting artists…in between pauses for her to answer the front door and ask new arrivals to make themselves at home. 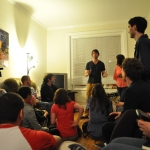 The Key: How were you introduced to the SoFAR Sounds series and what inspired you to bring it to Philly?
Carolyn Lederach: I have a friend, Rebecca Pierce, who’s really involved in music. She knew [SoFAR] was trying to start a branch here in Philadelphia, so she just got me in touch with them and it worked out. This is like the 15th city they’ve started it in.

TK: What other cities have it?
CL: It started in London. Here in the U.S., they have it in Dallas, L.A., New York, Minneapolis, and there’s ones in Europe and India too.

TK: Have you gone to any of the other cities, the London one?
CL: I have not. I’ve been meaning to go to the New York one, so one day soon. We actually did get help from the MCs up in New York, they came down here and gave us a hand starting things. This is actually our first solo run at it.

TK: When you’re programming each event, what do you look for in the musicians as well as the spoken word artists?
CL: We pretty much just look for something different, we try to mix everything to get a different genre and feel for every night. You have upbeat things, and you try to think about what would sound good in an intimate acoustic room. So obviously the artists would have to be able to strip down the music in some way, and still be fun and interactive. SoFAR has had different artists who use loop pedals and some electronica kind of stuff too. They’ve kind of tried all different things throughout the network.

TK: Do you choose the artists personally, or is it more of a committee?
CL: Everyone does a little bit of everything. Everyone in all the different cities will maybe hear a band and then suggest it because they might be [touring] in a different area. So for example, the girl who runs things in L.A. sent us some suggestions of bands she thought of, and bands will submit things. There’s word-of-mouth, or someone will see a band open for someone else. So it’s a bunch of things really.

TK: How do you find the houses you use as venues?
CL: Well, this is actually the second time we’ve been at Victor’s place. The first one was at Victor’s too; we found it because The Lawsuits [who played that show] were trying to help us find a spot. We had a couple people at the last one come forward with interest in opening up their place. I guess it’s all kind of word of mouth too, different people hear about it and think it sounds like a cool opportunity.

TK: There are a lot of similar DIY shows, house show operations, things of that nature going on in Philly. What do you feel sets SoFAR apart?
CL: Because it’s the global community of SoFAR, it’s beyond this one night. They usually have a live stream set up – we have the computer set up now to run the stream of the show online so people can log in anywhere and listen to it. And then we have the videographers and photographers and stuff, and those videos and photos will be sent around online to the SoFAR sites. So everyone kind of gets a feel for it.

TK: I think it’s interesting that you don’t really announce who’s performing; people who show up don’t necessarily know who they’re going to see. Why is that?
CL: That’s a good question! It’s about the musical community, and sometimes you have bigger artists come through, and you don’t want the huge crowd to come just for them. You want someone to come and appreciate the music itself, as opposed to just one artist. You want someone to sit down and just enjoy the whole night and not really care who’s playing. Or trust the SoFAR experience that we’re going to provide a great group of music.

TK: If you were to sum up the overall goal of SoFAR, how would you do it?
CL: The whole SoFAR thing started with the ideals of bring musicians out of clubs, where people might not really respect them as much. You pay to get into a show and you might be standing there trying to listen to your favorite band and the group next to you is talking, or on their phone. It’s about bringing music out of that medium and into this intimate setting where you have people sitting and collectively listening to what’s there.