SXSW Dispatch: Let’s dance (or not) with Kimbra, Apparat, Sleep ∞ Over and more
Events

SXSW Dispatch: Let’s dance (or not) with Kimbra, Apparat, Sleep ∞ Over and more 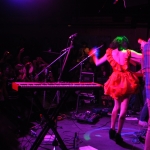 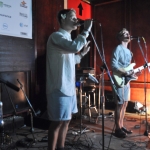 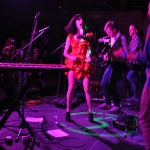 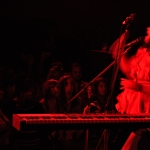 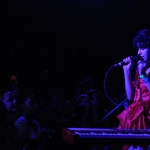 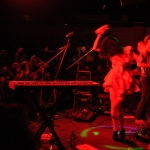 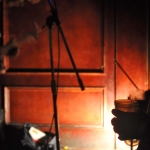 South by Southwest is a good place to find variety in just about any style of music. But variety doesn’t equate to quality across the board, as I found in a Thursday night survey of dance-music acts of various stripes. Things started off decently enough at Austin’s The Iron Monkey as I caught the last few numbers by D.C. art-punk act E.D. Sedgwick. Bandleader Justin Moyer has been dishing out subversive, groove-oriented jams in various acts since the late ’90s, and this one moves in the same dirty disco step. They were tight, the small crowd was moving modestly, but from there, the night took a massive dive at Barbarella with poor showings by two blog darlings: Sleep ? Over and Korallreven. Both had an absurd amount of electronics and delay pedals and seemed not exactly sure how to set them all up, much less use them properly. After 40-odd minute soundchecks for each, the sets were each underwhelming in their own way. Korallreven, despite (ultimately) sounding awesome, had an absolute nadir of stage presence (not good for beat-oriented industrial rock); Sleep ? Over’s Stefanie Franciotti, an Austin native, at least made an effort at dancing, and had a crew of loyalists up front who joined her, though she sounded messy and unstructured, and took to snapping at the sound and stage crew for her failings. (Not cool.)

Escaping the disappointment, I rushed to Deco Lounge to catch a midnight set by Virginia’s Eternal Summers. Their new material sounds great, but the roof deck they were playing at was higher and more removed from the crowd than The Troc stage. It’s behind a fence—whose idea was that? Finally at the Haven nightclub, things came together at the KCRW Showcase. New Zealand soul-rocker Kimbra had the room packed, and threw as much energy into her stage presence as she saw coming from the fans in the front row. She worked the crowd with hand-slaps and spins off the riser, and her band punctuated it with sharp playing. Following her, Germany’s Apparat brought down the mood but kept up the energy with dark, rhythmic, electronic pop reminiscent of Depeche Mode, played pointedly with movement, energy and enthusiasm—something others could sure take a page from.