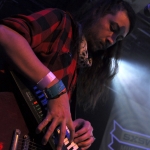 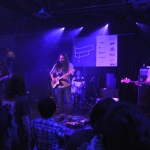 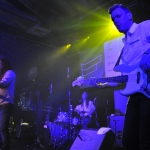 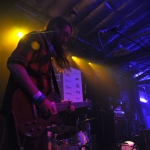 For about a year now, the “members” listing on Strand of Oaks‘ Facebook page has read “Timothy Showalter and growing.” That growth has been a steady process, and a thrilling one to watch unfold. Last summer, Oaks played its first gig as an evocative, synthesizer-heavy three-piece in the Catskill Mountains; this would become the band’s touring lineup for the next six months.

At South by Southwest last weekend, we saw another shift – Stand of Oaks is now a driving rock four-piece, with Deven Craige (also of Little Big League) on bass, Ryan Berg (of Project Object) on drums, and Jonny Ollsin (from Family Band) sitting in on second guitar. The new configuration is impressive, and short of “Sterling” from Pope Killdragon, the set showcased new material that’s taken a turn into uptempo, dare-I-say anthemic songwriting. Which doesn’t mean Showalter has abandoned his introspective lyricism or fits of brooding; he’s still the same thoughtful songwriter, but now with more immediacy. Check out the setlist below – highlights were the pulsing “Dark Shores” (which Oaks played on tour last fall) and “Maureen’s,” where Ollsin cut loose with a jaw-dropping guitar outro that betrayed the time he spent playing in metal bands during the early aughts.

While he was in town, Showalter filmed a Couch By Couchwest session covering “Long Desert Train” by Jason Molina (of Songs: Ohia and Magnolia Electric Company). You can watch the video below.