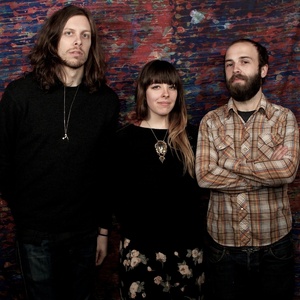 One of our favorite new Philly band record releases is the album from Hop Along called Get Disowned. The band is having its record release party and is headlining the First Unitarian Church tomorrow evening, Friday, June 1st with Band Name, Little Big League and Mary Lattimore. It was a year ago when Hop Along came in to the WXPN studios to record a Key Studio Session. You can listen to that session here. The center piece of Hop Along is lead singer Frances Quinlan, whose extraordinary voice brings to mind a young and restless PJ Harvey, and the intensity of Kristen Hersh. Along with her brother Mark on drums and bassist Tyler Long, the trio recorded their album over the last two years. Get Disowned is a glorious mess of melody, cacophony, soft/loud Pixies-esque guitar playing and France’s intense and enchanting vocals. The rhythm section adds more than just the right amount of punch to anchor the songs and Frances wraps her voice around the sounds with a deep emotional expressiveness. Go here for more information and tickets to tomorrow evening’s record release party. You can stream and buy the album in its entirety here. Below, download the song “Sally II” compliments of the band and watch Hop Along’s new video for “Tibetan Pop Stars.”