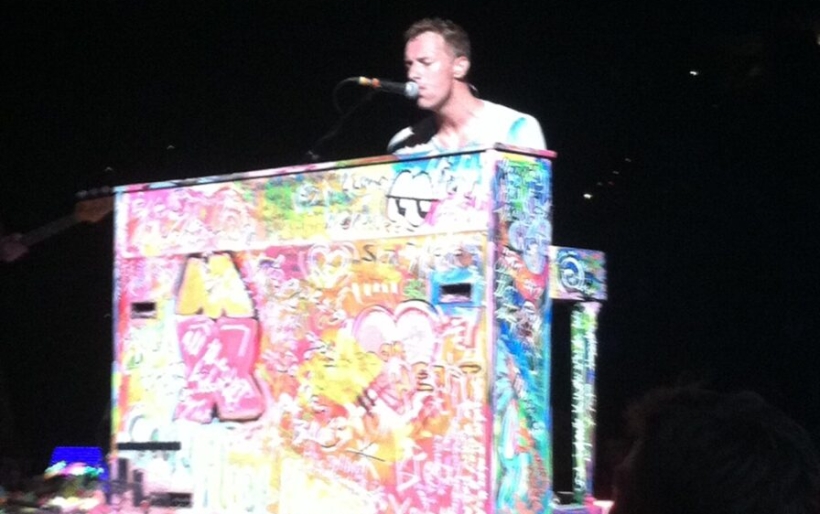 Last night at the Wells Fargo Center in Philadelphia, the music that was playing on the venue’s sound system in between acts was nondescript. That is, until there was a noticeable increase in the volume when Jay-Z’s “99 Problems” began pumping buoyantly through the PA system. The song got most of the excited sold-out crowd there to see Coldplay for the first of a two night stand on their feet. Seconds after the song ended, Chris Martin and company came out on stage, jubilantly opening with “Mylo Xyloto,” followed by “Hurts Like Heaven.” Then they started to play their hits; there’s a lot of them. And that’s when the confetti came, and lots of that too. Many bands wait to set the confetti canons off at the end of their shows working towards the standard emotional climax where the band plays “the hit single.” Not Coldplay. It was clear from the moment they played “In My Place,” “Lovers In Japan,” and “Yellow,” early in the show, that the band was there to give the audience their money’s worth. Coldplay proceeded to pump confetti and beach balls into the crowd and combined with a colorful and vibrant light show put on a fantastic, high energy show.

Early in its career Coldplay was a mediocre live band with a increasing catalogue of hits. Throughout 12 years of touring however, they’ve become an impressive stadium band with a lasting and very sing-alongable body of work. Over those years music critics have not written so kindly about the band. For almost two hours last night, it was the fans, and not the critics that mattered. Chris Martin and the band played the crowd one hit song after another. When the band returned for their encore, they appeared not on the gigantic stage, but on a makeshift stage in the back of the arena right in the middle of a section of the crowd; an impressive feat. The band played several songs on that stage before running across the floor of the stadium back to the stage where they ended with “Fix You,” and “Every Teardrop Is A Waterfall.” Coldplay perform again tonight at the Wells Fargo Center. Below, watch a couple videos and see the set list.

Setlist
Mylo Xyloto
Hurts Like Heaven
In My Place
Major Minus
Lovers In Japan
The Scientist
Yellow
Violet Hill
God Put A Smile Upon Your Face
Princess of China
Up in Flames
Warning Sign
Don’t Let It Break Your Heart
Viva La Vida
Charlie Brown
Paradise
Encore:
Us Against the World
Speed Of Sound
Clocks
Fix You
Every Teardrop is a Waterfall