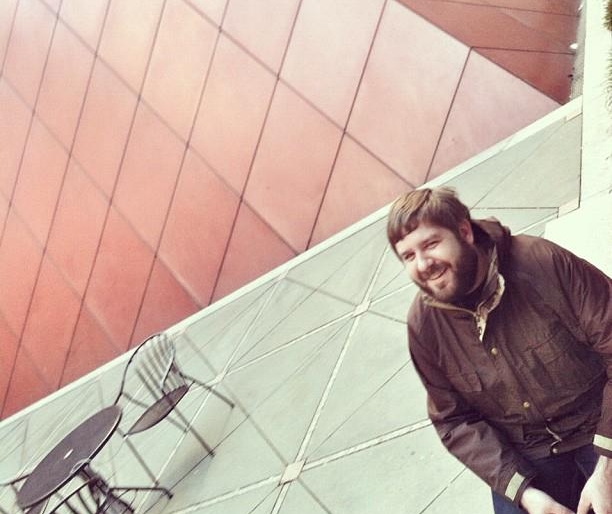 Tonight PhilaMOCA continues its music-and-film summer series, Tuesday Tune-Out, with Herb Shellenberger coming in to curate the month of July.

From booking shows to performing in bands (currently with Pet Milk; formerly of Brown Recluse) and screening films (his day job is in the programming wing of the Ibrahim Theater at the International House), Herb is a longtime player in the Philly indie scene with a wealth of knowledge both musical and cinematic. We asked him to put together a guest VJ post previewing the musicians and the films he’s picked out for the next four weeks.

From Herb:
I was asked by Eric Bresler of PhilaMOCA (also of Cinedelphia) to curate a series of live music + film/video on Tuesdays in July. I have also been thinking about starting my own screening series, so it was a good time to inaugurate Black Circle Cinema. John Vettese asked me to share some videos on The Key so here’s a guide to that series with accompanying videos. All events are at PhilaMOCA (531 N. 12th Street), start at 7:30pm and are $5.

I thought I would start off the series pairing my band Pet Milk with a film that I’ve wanted to show with one of our performances. Future Shock is a film I’ve been obsessed with for quite a few months now. It almost has the feel of a Mondo film but mixed with a sort of anti-cyberpunk technology paranoia. But the aspect that puts it over the top is that the “documentary” stars the elder version of Orson Welles, the one with the Cheshire cat beard who wears a cape. He’s almost convincing in relating the ideas from Alvin Toffler’s book that the film is based on: that people are going to become part-cybernetic because of artificial organs; that all of our relationships are temporary; that art will be created by computers instantly and replace man-made art.

Here’s a teaser for the film that I threw together:

Future Shock (1972) + PET MILK trailer – 7/10/12 from herb shellenberger on Vimeo.
Note: Unfortunately the motor belt in my 16mm projector broke, so we’re going to have to show Future Shock off of a DVD transfer from my 16mm film print. The film isn’t available on DVD or VHS so this is still a very rare screening!

Two ideas came to mind in the creation of this program. First, I wanted to do a program of “orphan films,” a term that refers to films outside of the commercial mainstream that don’t have any immediate caretaker. Examples of this include educational films or home movies, both of which are at risk and a priority for film preservation. You can film more information at the Orphan Film Symposium or watch many examples at the Prelinger Archives. Secondly, I wanted to do a program where musicians interact with the films. Jesse Kudler and Alex Tyson are both experienced improvisers who will be performing along with the selected 16mm films. Some we will run without the sound on. Some we will run with the sound on. The audio on some other films will be controlled and manipulated by the musicians. This is why I described the program as the musicians “improvising and interacting with” these films. No film in the program (such as “Polarization of Single Photons” or “Mission Third Planet: Creatures of the Land”) is online, but here is a taste of something similar.

Measuring the Universe, 1968, produced by Film Associates of America:

Tom Guycot was an easy choice for me. Ryan Todd has long been obsessed with film soundtracks and trawls VHS bins to look for new material for his DJ sets and inspiration for the synth-driven music of his project Tom Guycot. I wanted to give Ryan complete control over this night. He’s been hard at work ripping portions of his VHS collection to use as background video during his performance. After that performance, he wanted to screen Quiet Cool which is the pinnacle of his ideal film aesthetic: a renegade cop who is up against the world; a group of chiseled, anonymous bad dudes who are full-up on guns and drugs; and ridiculous explosions and mixed with intense 1980s synthesizers. We’ll be projecting Ryan’s VHS copy of Quiet Cool.

Tuesday 7/31:
Literature with videos by Shawn Kornhauser
This program came into my head because of the amazing video Shawn Kornhauser did for Austin power pop band Literature (who are no longer Austin-based as they moved to Philadelphia just last week). The video for “It’s Cruel” is a brilliant reenactment of the foot chase scene in Point Break with bassist Seth Whaland doing a pretty convincing Keanu. Literature will give their first performance as a Philly band and Kornhauser will present a 30-minute program of some of his short narrative work and music videos.

There will be more Black Circle Cinema programs announced soon. Stay tuned to Tumblr and Facebook for more.