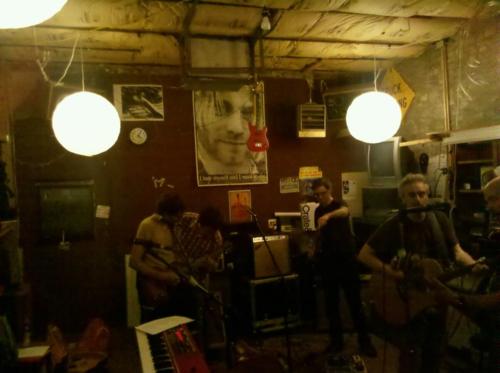 The hits keep on coming from re-energized Philly power-popsters The Bigger Lovers. After re-emerging last year with a brand new EP, a reunion show a gig supporting The Baseball Project and a small handful of other appearances, the band is back again this year to celebrate the 10th anniversary of Honey in the Hive, their popular 2002 album that garnered them a four-star review by Rolling Stone scribe David Fricke and a Live at the World Cafe session. The Lovers will play Honey in its entirety at Johnny Brenda’s on Sept. 8. Says the band:

The geekiest of Lovers geeks probably know that September 8, 2012 marks the 10 year and one day anniversary of the ‘Honey’ record release show at the Khyber in Philly, a memorable night for two reasons in particular:

1. Bassist Scott Jefferson totaling the van en route to pick up drummer Patrick Berkery for soundcheck, necessitating a fireman’s carry load-in wherein the band and friends stopped Olde City traffic to transport gear from the wrecked van off a flatbed.

2. Rumor has it TBL set the booze sales per capita record at the Khyber that night.

Opening the show is Phoenixville-based singer-songwriter Cliff Hillis, with whom Lovers drummer Patrick Berkery also performs from time to time. Tickets and more information can be found here, and you can stream Honey in the Hive below.