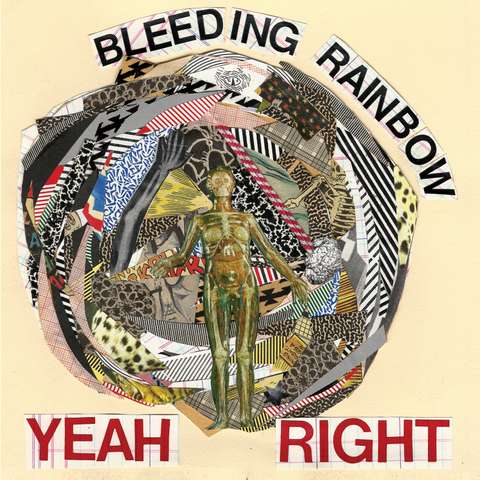 When they were planning their first full-length as a four-piece, Philly’s Bleeding Rainbow drew up a pie chart.

It had healthy slices of Sonic Youth and Wipers, a sliver of avant-garde composer Glenn Branca, and about a three-quarters heaping of My Bloody Valentine. Band founders Rob Garcia and Sarah Everton meant it as a guide, a reference point for the folks they were working with – producers Brian McTear and Jonathan Low at Miner Street Recordings in Fishtown, Kyle “Slick” Johnson at Fancy Time Studio in Kensington – as well as a notation of their personal goals.

On Monday, the band got to hear the finished version of their new record Yeah Right for the first time, and Garcia reports that the pie chart plan succeeded.

“We think it came out pretty excellent,” he said when we caught up with him by phone yesterday afternoon.

Bleeding Rainbow is the latest phase of the band that Everton and Garcia began upon moving to Philadelphia in 2008. Back then, it was called Reading Rainbow, it was just the two of them, and it was very pared down fuzzy indie pop on an album called Mystical Participation. Their 2010 followup Prism Eyes blew the gates off and made their sound bigger and bolder. But when it came to performances, the band remained staunchly minimal.

“When we were touring off that album, it was just Sarah and I in the car, driving from show to show,” Garcia recalls. “So we got really into listening to Wipers, to Sonic Youth and Glenn Branca, and it hit us – we need more guitars. We really need to make this more complex.”

That yearning for growth creeped out in interviews during that time, and on their various online outlets, where the duo (mostly Everton, a savvy and often hysterical Tweeter) reacted to being pigeonholed as a cutesy-poo married couple making loving pop songs. They saw themselves as something much heavier than that. So they gave their friend Al Creedon a call. He worked with the band on some of their earliest recordings, and they knew that if ever they were going to bring in a third member, Al would be the guy.

“We taught Al the guitar parts to almost all of our songs while we were on tour,” Garcia says. Last summer, they began playing shows as a three-piece. Over the winter, they announced (to the astonishment of many) a name change, and swelled to four – with Greg Frantz stepping in on drums and Everton moving up to bass.

Creedon in particular is an explosive addition, a force of nature on guitar that quickly began pushing the band in the direction Everton and Garcia longed for on those car rides during tour. His hair hangs in a mop covering his eyes, his wrist is a blur as he wails away on chords and notes, he does splits and flails around and generally looks like a dangerous dude. When I caught them at South By Southwest this March, he swung his guitar around so intensely during closing number “Shades of Eternal Night,” hammering its neck against a windowframe and scraping it along the venue wall, that the instrument’s headstock actually split down the middle. (He’s actually a pretty reserved person when he’s not rocking out, as I found out from his soft-spoken conversational voice as the band loaded offstage.)

Between his energy, the fierce backbeat provided by Frantz, and Everton’s bright harmonizing and emphatic co-fronting duties, the band has very much shed its former self in the onstage realm. And based on the montage of songs from the new album released in a trailer yesterday, the same could be said for their recordings as well.

“We knew our next album is pretty much all or nothing,” says Garcia. “So we went for it.”

Yeah Right comes out on October 9 on Kanine Records, which also put out the last few records by Eternal Summers, close comrades of Everton and Garcia from when they lived in Richmond, Va.

“We’ve been friends with Eternal Summers for a long time, and we know through them that Kanine is going to be a really good home,” Garcia says.

Check out the album art and track listing below, and keep tabs on Bleeding Rainbow on Facebook.