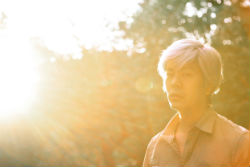 Onetime guitarist in 90s alt-rock behemoths Smashing Pumpkins, James Iha always had a soulful, sensitive side that may have gotten overshadowed when he was rocking out to crushing power chords and cosmic effects pedals. His own songwriting was sometimes spotlighted in Pumpkins albums (notably on 1995’s Mellon Collie and the Infinite Sadness), but was more often relegated to maxi-singles and EP (though it’s worth noting that he is responsible for the best b-side in the Pumpkins canon, “The Boy”). Since releasing his wistful, romantic solo debut Let it Come Down in 1998, Iha has remained more of a collaborator – working with Isobel Campbell, Fountains of Wayne and Hanson over the years – but this year he’s returned once again to his own songwriting on Look to the Sky, and the tour in support of it brings him to World Cafe Live Upstairs on Sunday, Oct. 7. Tickets to the show go onsale this Friday, July 27, and you can watch the video for the single “To Who Knows Where” below. At first the song sounds like it might possibly be the most amped up thing in Iha’s solo catalog – it’s thumping and epic – but once the verse kicks in, you’ll hear it still showcases the poppy melodies and sentimental lyrics he does so well.