Unlocked: The Key's review of Sing by Aaron and the Spell - WXPN | Vinyl At Heart 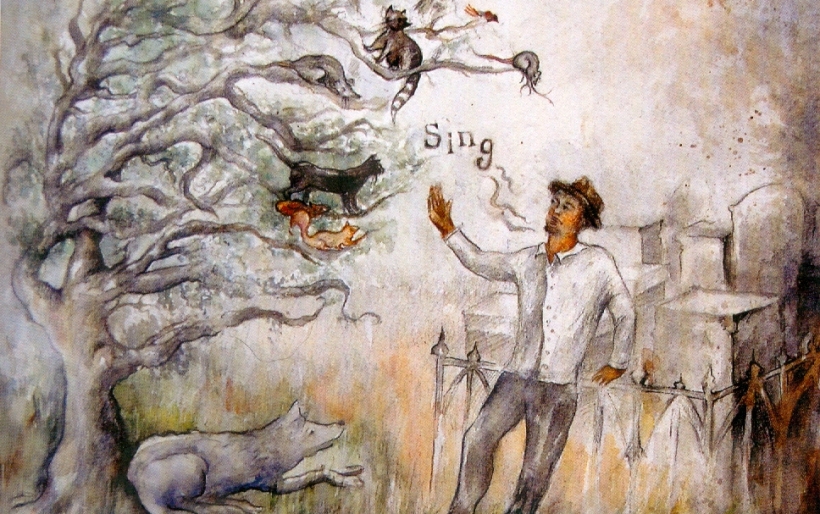 Unlocked: The Key’s review of Sing by Aaron and the Spell

Aaron Brown doesn’t seem like the tormented, tortured-artist type. If you meet him – at a show or, as I did, in the recording studio – he comes across as a friendly, soft-spoken gentleman who laughs, shakes your hand, smiles shyly and sits himself behind the microphone. Then he opens his mouth to sing, and wow – the booming voice that emerges conveys all manner of emotions and  experiences. With the release of Sing, the CD his band Aaron and the Spell unveiled last week at the Philadelphia Folk Festival, Brown establishes himself as a force to be reckoned with in the world of new soul. That’s not “soul” in the overglossed top 40 pop music sense, nor is it soul in indie / pastiche sense. This is something more classic, more genuine, harkening back to the music made in the 1960s and 70s by Sam Cooke, Otis Redding and Smokey Robinson.

Opening stroke “By My Side” bemoans stress and desperation through an exuberant revival-tent spiritual: “These days I just got pressure, nothing but the beast,” Brown belts out. “I’m not asking for the cure, just a little peace.” Backing vocals by Ali and Claire Wadsworth rise and fall as the song presses onwards, in search of musical release. Having exorcised those demons early on, Brown seeks to help others on the very next track – the sultry groove of “Don’t Cry” is a total Stax Records send-up, and Brown’s outlook is less tense, more comforting, as his voice in softer tones delivers “lay your burden down”-type sentiments. “If you want to laugh in the rain, just think of me,” goes one line – a curious image that couldn’t be more appropriate.

The backing ensemble, helmed by production guru Ross Bellenoit, is adept at different styles, from the windswept strings on “Won’t Go” to the roadhouse blues of “Another Way,” where plunking upright bass and buoyant barroom piano cushion a tremendous vocal performance by Brown. “Greatest Day” is the pinnacle of full-band rockers on Sing, and probably the biggest crowd-pleaser when the Spell performs. But the sentiment beneath its get-up-and-move boogie is lacking compared to the rest of the record – it’s essentially Brown’s three-minute lusty chase after his female ideal, and hot-and-bothered isn’t a look he pulls off as well as poetic philosopher. Don’t get me wrong, the song totally cooks, as does the record as a whole. But the hallmark of a good songwriter is one whose songs don’t need to play dress-up in order to make their impact, and the quietest moments on Sing might just be the ones that hit the hardest.

The jazzy “Winter in Berlin” is stunning and stirring; its midtempo melody might be easily overlooked on first listen, but the soft muted horn and breezy piano help it grow to be a standout on repeated listens. Then there’s “Maria Full of Grace,” a character study centered in Spanish guitar; we knew was a winner when Brown played it in his Key Session last week. Wrapping up the record is the moving crescendo of its title track, where we see Brown revisiting the choirs and spiritual Sunday mornings he was exposed to as a youth, visiting church with his grandmother in Florida. It’s not a song that preaches, but rather one celebrates – one where Brown reveals his mission statement, embracing music as a vehicle for personal discovery and musical release. Sing is the featured album in this edition of Unlocked; hear the spotlighted single “Don’t Cry” in yesterday’s post, and check back later in the week for interviews, video and more.