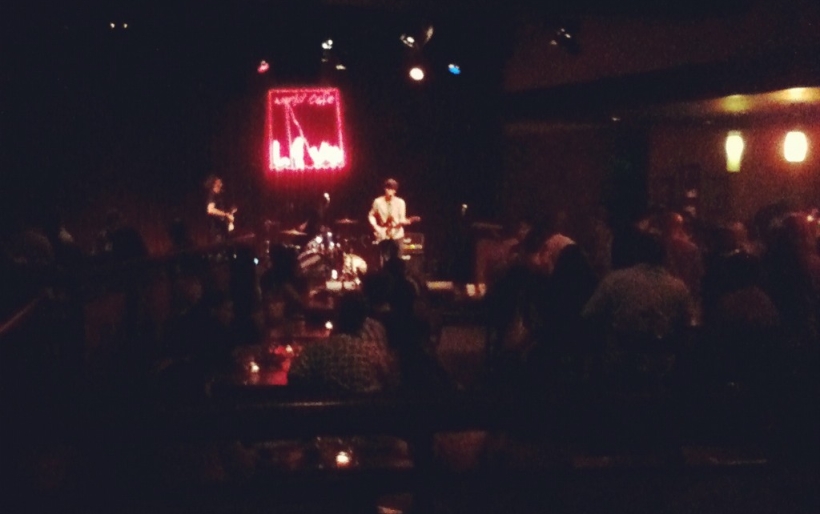 Last night was my third time sitting on the judging panel of World Cafe Live‘s annual Beta Hi Fi finals, and the competition was impressive as ever. A half-dozen acts from the Philadelphia area took to the stage over the course of the night, all of whom had won their slot from audience votes earlier in the week, and the room was abuzz with fans, friends and family members rooting for their faves.

Along with my fellow judges – Pat Rapa, music editor at City Paper, and Stephanie Seiple, founder of Tri-State Indie – I had the tricky task of helping make sense of the melee, and doing so without being overly influenced by the minor cadre of intense dudes in Riley Road t-shirts who stared us down at constant intervals over the course of the evening.

As it happened, the Phoenixville trio did run away with top honors – not because any of us were worried about mob justice – but because the young band flat-out rocked. Their raw electric blues thing was tightly modeled after the Jimi Hendirx Experience, not only in structure and sound, but also spirit. Riley Road tackled Jimi’s “Red House,” for instance, taking substantial liberties as far as phrasing, pace, instrumental solos and overall duration. This wasn’t a faithful-to-the-original rendition in the least, and some might call that blasphemy. But by embellishing things and putting their own spin on the classic, they were actually more faithful to Jimi than a note-for-note cover might have been. The rest of the set was original material from their self-titled EP – power blues rock that was full of rough, rumbling bravado and intense musicianship. Occasionally a guitar solo wandered too long, or a drum fill got too complex, but as my fellow judges and I agreed, if our biggest concern is that the band is just too talented, that’s not a bad problem for them to have.

South Jersey-bred five-piece The Naked Sun also turned in a great showing to finish as a close second. Their act is a shuffling roots-rock boogie tightly punctuated by hummable saxophone lines, snappy rhythms and an energetic delivery – perfect late-summertime jams, ideal for dancing in the outdoors. Kind of made me wish we were holding this competition just across the way at Penn Park. (An idea for next year, Beta Hi Fi?) Both Riley Road and The Naked Sun won packages that included gear gift cards from Sam Ash, studio time and slots at the Dewey Beach Music Festival in Deleware.

Rounding out the finals were an eclectic assortment of competitors. Jam-rock outfit The McLovins channeled The Band and Phish in their three-song, 20-minute set, while A Cool Stick from Philly played funky instrumental backings to rapper Luke O’Brien, who was a charismatic frontman, albeit goofy-as-all-get-out (sample lyric: “you have the opposite of fish breath”). Meanwhile, acoustic pop groups Runaway Love and Shane Palkow tipped a hat to their favorites, tackling songs popularized by Frightened Rabbit and Jeff Buckley respectively. Beta Hi-Fi continues this week at World Cafe Live at the Queen, and I’ll be back on the judging panel for their finals on Saturday. See you then!