Day Two at Made In America: Pearl Jam, Drake, Odd Future, Jill Scott and the return of Run DMC - WXPN | Vinyl At Heart

Day Two at Made In America: Pearl Jam, Drake, Odd Future, Jill Scott and the return of Run DMC
Artists

Day Two at Made In America: Pearl Jam, Drake, Odd Future, Jill Scott and the return of Run DMC 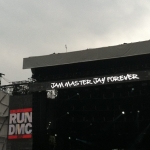 It was just another typical star studded day fun day of music at day two of Made In America yesterday on the Benjamin Franklin Parkway. Jay-Z performed “99 Problems” with Pearl Jam. Pearl Jam covered The Who, The Clash and ended their set with Neil Young’s “Rockin’ In The Free World.” Drake brought out 2 Chainz to perform “No Lie,” then introduced French Montana to rap with him. Philly soulsinger Jill Scott brought Eve out on stage for a couple of songs. Jay-Z and Beyonce walked throughout the crowd and stood on the side of the stage for a dazzling set by Gary Clark, Jr. (Clark was the only artist to play both days). Tyler, the lead rapper from Odd Future, was dancing on the street to Drake. Even the fans got in on the action; Santigold invited several dozen audience members to dance on stage during “Creator.” While Pearl Jam were the headliner favorites of the day, it was the return of Run DMC that got the most exuberant reception from the crowd. Under a banner that said Jam Master Jay Forever (jay was murdered in 2002), Run and DMC rocked the classics including “Walk This Way,” “My Adidas,” “Mary, Mary,” and “Rock Box.” They paused a moment to remember their DJ and brought out Jay’s two sons, who are adept DJ’s themselves, for a short set. It was a poignant moment during MIA’s second incredible day of music. Below, watch a fan videos of Jay-Z and Pearl Jam performing “99 Problems.” Via Youtuber That Guy In Philly watch Run DMC’s “It’s Like That,” “It’s Tricky,” and “Walk This Way.” Go here to see Pearl Jam’s complete set list.
Related Content
View All Related Content