Unlocked: The Key's review of The Bull by Blayer Pointdujour and the Rockers Galore - WXPN 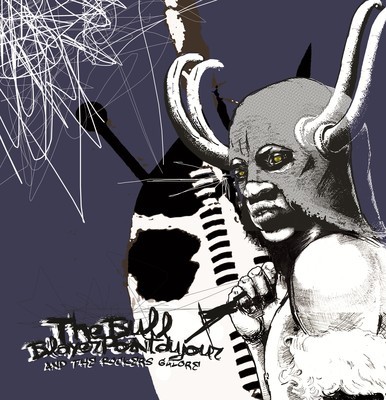 Unlocked: The Key’s review of The Bull by Blayer Pointdujour and the Rockers Galore

Blayer Pointdujour isn’t one to make a point lightly. The lead-off track on his debut full-length The Bull, available digitally this week via Philebrity Label, is called “1804” – a reference to the year Haiti gained its independence from France in a slave revolt. Crashing cymbals and shredding rock guitar gallop out the gate, an onslaught back into history as Pointdujour takes the first person view of someone who’s “been working these fields in these plantation days / why should I work the land if I’m never getting paid?” As the song progresses, Pointdujour draws a parallel between the climate that led to the Hatian Revolution and echoes of division and struggle in the world today. It’s a bold and admirable opening statement to make on The Bull, an album that’s socially pointed and provocative, but also celebratory and inspirational.

“Iron Dread” continues this train of thought to a chugging reggae beat and a hook we’re familiar with from when Pointdujour and his band The Rockers Galore recorded a Key Studio Session last September. I’ve been returning to that song over and again for a year now, and I still don’t think I’ve fully absorbed it. Dig this: it’s a midtempo number, not because it’s trying to strike a breezy easygoing island vibe, but because it needs to be slow to fit in everything Pointdujour wants to say. Up front, he paints a picture of a division between the haves and have-nots with a story about his Hatian uncle, a well-off resident of Port au Prince who was robbed by militias – and was okay with it because “his passion’s for the poor and tales of Toussaint.” Again, Pointdujour turns self-reflexive, showing echoes of the scene in present-day America: “I’m too old to be dumpster-diving in the back for bread / I’ve done my damndest to keep my head above water / delaying my dreams of having sons and daughters.”

I’m sure making this sound heavy, aren’t I? Maybe a bit heavy-handed? Perhaps, but Pointdujour makes his argument in such a forceful way that you want to listen – you get drawn in and riled up. In this sense, you could call The Bull a revolutionary record. But the most revolutionary thing about it is how honest and human it is at the same time. When hard times hit, what do people want to do? Many of us default to escape-and-hide mode, avoiding reality, maybe through denial and ignorance, maybe through partying and cheap nightlife, maybe through drugs and alcohol. The Bull reflects these realities too. The lively banger “Gunz of Philly” riffs on The Skatalites’ classic “Guns of Navarone,” describing a feverish night out at The Barbary, as well as the motivation behind ducking away from it all in the Fishtown nightclub scene: “Pen and pad in my hand, and on and on / no cash, no job, and on and on.” The bright and body-moving kompa of “Mansion Party” is a more of a lost-in-the-moment number, abstractly thinking about the city and its rougher pockets while dancing the night away. A guest verse from legendary rapper Schooly D closes out “Ominous Black,” bringing the album to its ribald pinnacle. Meanwhile the simmering dub of “One Hit” is more of a head-on depiction of numbing oneself from harsh realities: “Where I go, you don’t really want to know. / I’m probably rolling down Broad with my eyes hazy.”

If we wanted to, we could say The Bull is about three things. First there’s the struggle, the hard times and desperation. Then there’s the escapism, the “everything sucks, screw this, I’m going out partying” outlook.  And lastly, there’s the redemption, the inspiration, the drive to overcome. The cool trumpet and humming organ tones of “Stay Icey” are soothing, as Pointdujour reminds us “Hard times come and they go / makes no difference to me.” Equally invigorating and motivating is “Trash Talker,” which dresses down those who stew in negativity and stresses the importance of staying positive. “The backpacker burdens don’t way a ton / Ooh, look up to the sky / believe you can fly above the stars.” With the joyful refrain, and the tireless excitement of the Rockers Galore players, this song sets the opposite scene as the opener – you’ve been through the darkest hour, and daylight is just ahead. The Bull is the featured album in this edition of Unlocked; hear the spotlighted song “One Hit” in yesterday’s post, and check back later in the week for interviews, video and more.