Dead rock stars get surreal in New Paradise Laboratories' 27 (at Plays and Players through Sept. 16) - WXPN 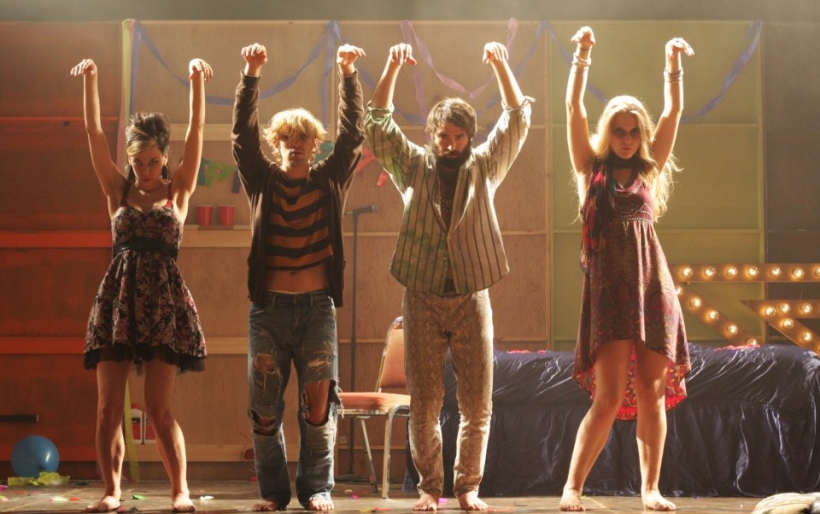 Dead rock stars get surreal in New Paradise Laboratories’ 27 (at Plays and Players through Sept. 16)

Call it a theater piece for the rock and roll crowd. 27, a curious production at Rittenhouse Square-area theater Plays and Players for this year’s Live Arts / Fringe Festival, raises questions about fame, immortality and the pressures of public scrutiny by crashing an after-life party of members of music’s infamous “27 club.” In it, we get to spend some 75 surreal minutes with Jim Morrison (played by Kevin Meehan), Janis Joplin (Allison Caw), Kurt Cobain (Matteo Scammell) and Amy Winehouse (Julia Frey). They clamor about a vertigo-inducing set – a large blinking radio tower stretched over the audience’s heads from the green terrain of the theater’s back wall, the stage underneath a bare apartment, floating in the ether, at an angle to earth.

We have no idea how long the musicians have been here together in this rock purgatory – could be years, could be decades – but their similar fates have bound them together for eternity, and they each process and react to the situation in their own way.  It’s a heavy load, but presented very abstractly by Philly-based experimental theater troupe New Paradise Laboratories, where we’re given ample distance to form our impressions and draw conclusions. Cobain, for instance, doesn’t go on extended literal soliloquies about suicide, but rather recites cryptic couplets from his song lyrics. Likewise, when Joplin and Morrison speak, they paraphrase interview quotes. Much of the message is delivered through movement – stomping on tables, climbing walls, bounding across the floor. No words are even spoken for the first five minutes of the performance. Following the piercing sound of squealing tires and a smashed car, lights raise on a stage covered in fog, the characters bending and lurching in zombie-like motions. Eventually a guitar-playing omniscient narrator (Alec MacLaughlin) steps to the microphone and begins strumming a space-rock interpretation of “Come As You Are,” and the cast begins a hypnotic loop of movement around the stage where we try to learn something about each from the little information they give us.

Staggering around stage with his hand in his pants, pumping his fists and hollering, Morrison seems to be struggling with masculinity and sexual aggression. Winehouse by comparison is distressed, gyrating at a microphone then cowering in a corner with a panicked expression; she’s tense and despondent, but covers it up with glamour. We could see Cobain as a melancholic daredevil, and Joplin a righteous libertine. Or not. Your read might be different from my read, and there’s no conclusive “big reveal” in the performance.

The closest we get is the introduction of a new party guest mid-way through. She’s played by Emilie Krause and credited simply as Riley, but with everybody else on stage a dead rock star, the impulse is there to figure out her famous equivalent. References to eating disorders (Winehouse taunting her by sticking a finger down her throat) suggest she might be Karen Carpenter – who was not 27 when she died – while her dress and mannerisms are oddly reminiscent of Fiona Apple (who is neither 27, nor dead). Turns out Riley is simply a regular old mortal who was in a car accident – the squeals we heard at the beginning – and her circumstances have temporarily landed her with the 27 club, who immediately are fascinated with this new visitor.

The rock stars are desperate to interact with somebody new, and seem equally drawn to her normalcy. This is something they will never know – though long dead, each will live on through their fame, forever 27, forever skinny and strung-out and iconic. Riley’s recounting of her own lovelorn depression and the circumstances that led to her death – the only straightforward monologue in the performance – is an echo of the musicians’ own plights, showing that beneath their celebrity, they were humans with human emotions and problems that were intensified when fame broadcast them to the world.

Like I said, heavy stuff. And those who are inspired to dig even further are able to, since 27 continues with online extras at New Paradise’s inventive interactive Frame website. For others, the performance might prove perplexing, bewildering and intense – it requires a lot of patience for non-linear storytelling. But even the most traditionalist person in the crowd would have to admit that, whatever weirdness was happening onstage that they didn’t understand, MacLaughlin’s evocative guitar score and haunting shreddery carried them through it. And if they gained a flicker of insight into what it means to be a troubled celebrity on the way, all the better.

27 will be at Plays and Players Theater, 1714 Delancey Place, through September 16. Tickets to the all ages performance are $28 to $35, and available here. Nick Stuccio, producing director of the Live Arts Festival, will moderate a post-show discussion at the September 13 performance only.