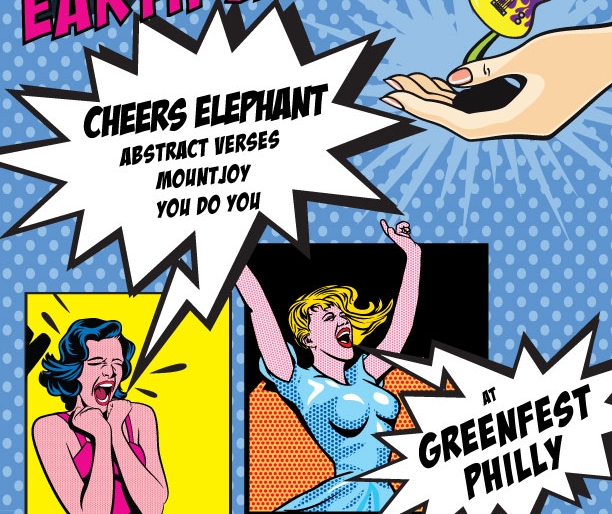 While planning for their 45th Anniversary this fall, Clean Air Council policy analyst Katie Feeney learned that in 1992, to celebrate its 25th year, the organization put on ‘Earth Jam’ in Chalfont, PA.

“We had a few acoustic musicians play at last year’s Greenfest ,” Feeney said. “But I thought it would be fun this year to really commit to reviving ‘Earth Jam’ 20 years later to celebrate the Council’s 45th anniversary. So we went all out!”

The eclectic bill of local artists for Earth Jam II came together, as Feeney put it, organically. “Personally, I don’t think there’s a more exciting band in Philadelphia right now than Cheers Elephant,” she said. “They’re so much fun to watch and they’re also wonderful people. Whether it’s true or not, I’ve convinced myself that their song ‘Jumbo Shrimp’ is about the BP oil spill. I think the message behind many of their lyrics is relevant and meaningful to those concerned for the planet.”

Mountjoy bassist Bobby Szafranski signed on as a Greenfest volunteer initially, and it wasn’t long before he brought the band with him. Abstract Verses came on board as part of the extended Cheers Elephant family. And  You Do You is Feeney’s new band with members of The New Connection and Crills Wilson.

“So I’ll be singing at Earth Jam,” she says. “In addition to planning it and running the stage.”

When they’re not onstage at Greenfest, the artists on the bill try to apply sustainable living to their work as musicians.

“Over the summer we had a show at a festival up in Maine and because most equipment was supplied at the location, we were able to drive up in a hybrid,” Abstract Verses vocalist Matt Dancis says. “We got up and back using a little more than a tank of gas each way. That said, usually we have to take a van, which is always hectic and expensive.”

Van travel is a difficult reality for touring bands, but Cheers Elephant singer-guitarist Derek Krzywicki says “now we have a van that’s not from the 80’s,” so their miles-per-gallon ratio is a bit greener. “We also tend to camp in national parks and always pack out what we brought in,” he adds.

The cause of sustainability and eco awareness is just as important for the artists when they’re not on the road. Krzywicki says he’s dismayed by seeing so many Philadelphians throw their garbage down sewer drains, in the street and in vacant lots. And Szafranski points out that Pennsylvania was just voted the second most polluted state by the National Resources Defense Council.

“So it’s good knowing there are efforts being made to create some awareness,” Dancis says. “Music is always a good vehicle for getting people’s attention.”

The free event takes place on Sunday, September 9th at Headhouse Square in Society Hill from 11 a.m. to 5 p.m. 2nd street will be closed for Greenfest from Pine to South street. The Main Stage is closest to South St.