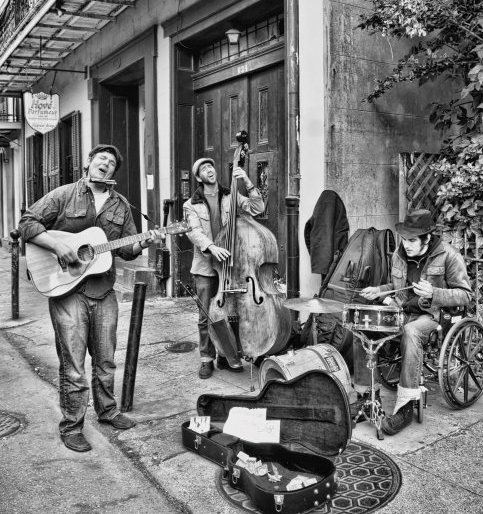 Dan Bruskewicz has the rare ability to bridge worlds – hitting you with heavy subject matter, and making you dance to it. The frontman and primary songwriter in Philly punkabilly band TJ Kong and the Atomic Bomb spins wandering, interweaving stories about outcasts and outlaws on dramatic benders, suffering from cocaine nosebleeds and bourbon hangovers as they cling to their last thread of sanity. But the punchy, fast-paced folk-rock of the Atomic Bomb – heard on its 2010 debut Idiots, and the brand new Manufacturing Joy – takes these stories of desperate living and uplifts them into danceable, laughable jams. It’s basically a black comedy set to indie-Americana. With the band releasing its new record in a massive hoedown throwdown at Johnny Brenda‘s tonight, The Key talked with Bruskewicz about messing with moods, the literary inspiration behind the music, and what a good amount of time between records really is.

The Key: There’s a great contrast on the new album between beautiful, moving instrumental arrangements and these dingy, dark, kind of depraved stories. I love music and art that creates that juxtaposition; what draws you to it?

Dan Bruscewicz: Definitely the same thing. We all sort of have that in our heads when we’re creating. I’ll write something dark – I mean, it’s all dark when I write, very few of my songs have happy themes. But then when I bring it to the band, basically we make it fun. That was the initial draw between me and Dan [Martino, drummer]. I was writing these singer-songwriter folk-blues tunes that, by themselves, were just dark and thick with verbage. And Dan was playing punk drums, and pop punk drums, and stuff like that. He was doing straight-up drunken mess shows, just for fun. And so we wanted to see what the two things sounded like together. So that’s been the idea without ever really saying it to each other, since the first day we practiced together. I’ll write something dark, and he’ll bring something fun to it with the drums.

TK: That definitely comes across in seeing TJ Kong perform – it’s always a very celebratory atmosphere, even though you’re singing about some heavy stuff.

DB: We feel the same way at shows. It’s impossible to escape the fact that people are trying to get really f’d up and have a good time at a rock and roll show. So no matter what songs we write, no matter what they’re about or even sometimes how they sound, the people who come to shows – the people who come to our shows – they just want to party, basically, they just want to get down. So we are kind of making this as we go along, we’re kind of manufacturing this atmosphere. So we kind of figured that would be a good title for the record, Manufacturing Joy. I haven’t really told anyone this yet, but we’re also planning a tryptich of albums, and the names will go together. Idiots, Manufacturing Joy…and the last one. It’ll complete a sentence.

TK: The arrangements on the album are very striking. Prior to TJ Kong, do you have a background in composing music?

DB: No, I don’t. I have a background in writing and that’s it. I was just always wanted to be a writer, and eventually I honed it into a writer of drama, screenplays, plays and fiction. That’s’ all I wanted to be my entire young adult life. And then after actively doing it for a while, I think everyone who does it, unless they’re very lucky, gets the realization pretty quick that its incredibly difficult to make any money. When I was doing it really actively in my early 20s – when I was like “I’m going to take a few years and write, and  try to work with this community in the world” – sometimes you have to be humble as a writer, it’s very important. Nobody ever sits down and tells you that, because writing in and of itself is masturbatory, it’s self loving in a lot of ways. There’s a lot of emotional tie-in to the work, and then when you’re trying to get into the world of actually where business meets the writing, you can’t be too tied to it. You have to be able to let things go for the money or you’re going to starve. So music, it became evident, that it’s a much more viable option as far as money. Which is funny, because most musicians will tell you it’s not. But compared to the other world, trying to sell a short story, it’s much more viable.

TK: The stories in these songs kind of remind me of Nick Cave’s Henry’s Dream, the plot twists and turns.

DB: The only other musician I know of who could write a good book.

DB: I would say 70s New York punk was a very big influence – Talking Heads and Patti Smith, at a very young age I got into that. It’s funny how kids from 1970 on probably went backwards into French poetry through Patti Smith instead of the other way. You know, you don’t know anything about Arthur Rimbaud in high school, and you’re listening to ‘Patti Smith and you’re like “hmm, I’ll take a look at this guy!” Then in high school I found out about all the musicians and songwriters who came out of the beat generation, who Ginsberg influenced and stuff like that. I got heavy into Bob Dylan, really heavy into Bob Dylan. I think everyone does at some point. And then, as far as writing-writing, a lot of what I love are people who write drama. So I really like Ibsen, I really like Edward Albee, Arthur Miller, Tennesee Williams. Then as far as films, all the people they influenced: the Coen Brothers are a big favorite of mine. I guess I’m influenced more by drama than novelists, but I love Don Delillo and hallucinatory stuff. I can get lost in that world, but I feel like the music I write is more influenced by the movies and plays I like than the books I read.

TK: It’s been two years since your last record, Idiots, came out. You took time on this one, but not an inordinate about of time. It feels like you put a lot of care into the record. What do you think is a good amount of time between albums?

DB: Everyone in the band, everyone I talk to, has been like “It’s been so long! Why has it been so long?” Which I guess is a good problem to have, because it means they want what’s coming. But I totally agree, I feel like two years is the normal amount of time. One year might be rushing it. But I feel like bands can get in the zone where you discover this thing that works as far as recording, and your process just clicks. And maybe for a few years, you put out an album a year. But that’s only in those cases. The only way to put out an album a year is to find that sweet spot and ride it out. As a writer, that’s difficult to do, and make what you’re writing good. But two years to me seems like it should be the norm. You’ve got a year of promoting, rolling it out, celebrating the album. And then a year to work on the next one.

TK: Plus if you follow it up too soon, you’re killing the opportunity for anticipation to build up.

DB: Exactly! Which is 90 percent of it. You want anticipation. The only way to get it is to make it build up.

TJ Kong and the Atomic Bomb celebrates the release of Manufacturing Joy with Toy Soldiers, Double King and The Looks Of It tonight at Johnny Brenda’s, 1201 North Frankford Avenue. Tickets to the 21+ show are $10 and available here.