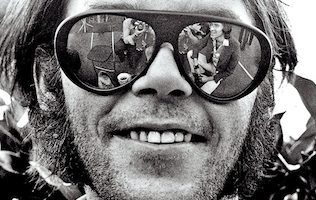 This weekend, witty folk / rock songwriter (and recent adopted Philadelphian) John Wesley Harding reviewed Neil Young‘s new memoir, Waging Heavy Peace, in the Wall Street Journal. Writing under his offstage name, Wesley Stace, he observes that Young’s book follows in step with Bob Dylan’s Chronicles and Patti Smith’s Just Kids – both of which were free of co-authors, both of which capture a specific moment in music history. However, this book has a unique slant:

But Neil Young—Californian hippie, Canadian folkie refusenik, Godfather of Grunge—isn’t so easily sold. “Waging Heavy Peace” will likely find most of its readers among his audience, the “Rusties.” That is a shame, because the book is terrific: modest, honest, funny and frequently moving—an antidote. “Waging Heavy Peace” is typical, in structure and tone, of a man who has seemed at times to be consistent only in inconsistency, both in his artistic output and in his views: a songwriter who once scrapped album after album and now releases everything, a guitarist who creates unearthly random noise yet is annoyed by minor mistakes on the recording of “Like a Hurricane.”