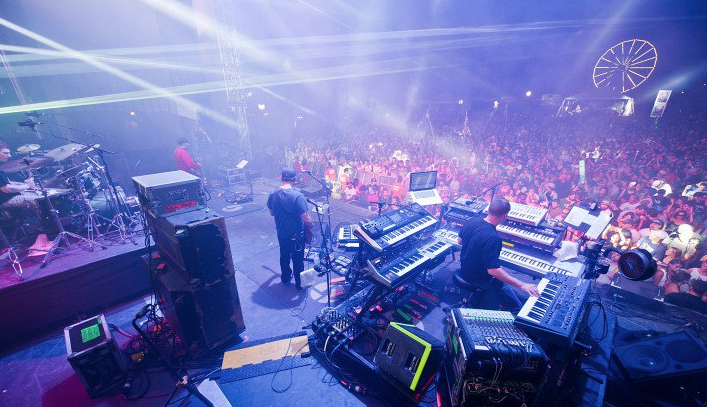 From the desk of The Disco Biscuits: City Bisco preview, part 2

The bright lights and electro-rock vibes of the extended Disco Biscuits family will set up camp at The Mann Center this weekend for the Biscuits’ inaugural City Bisco festival, happening on Friday October 5th and Saturday the 6th. This week, we enlisted the Disco Biscuits as guest contributors to The Key, beginning with a Spotify playlist from keyboard player Aron Magner here. Today, the festival overview continues with bassist Marc Brownstein. And don’t forget – we’re giving away a pair of festival passes, so enter now to win tomorrow.

What’s up Philly, it’s Brownie from the Disco Biscuits. I hope you all caught my bandmate Aron’s City Bisco Preview playlist the other day – if not, you can read and listen right here. Turns out he missed a couple of the 15 acts joining us at the Mann for the next two nights, so I’ve got his back – check out our UPDATED playlist here and read on for some deep thoughts…

Brothers Past are literally like the little brothers we never had. We keep inviting them back to our fests year in, year out for a reason… they’re awesome! Tommy even lives in Magner’s house! That’s how close we all are. I’ve been playing with them in bands for over a decade, and there’s no way we’d ever throw a Philly festival without having our closest friends in the scene right by our side.

Speaking of family, Wyllys (aka Wade Wilby) has been a part of the Disco Biscuits’ fabric for over a decade. When we started hanging out with him, we were surprised just how much he knew about our culture, our band, and our scene. In the ten years that we’ve been friends with him, it’s been a pleasure to watch him go from a total unknown to the leader of the nu-disco scene in the States. If you want to dance tomorrow, make your way up to the Skyline Stage at 4:00 as Wyllys kicks off an evening of nu-disco at the Mann. Wyllys isn’t on Spotify, but check out some tracks at his Soundcloud.

Nadis Warriors – Two years ago when playing Nocturnal Festival outside Austin, I heard some really nice sounds coming from the stage. I turned around said “Who’s this?,” and was told it was a local Texas band called the Nadis Warriors. And I made a note right then and there, look out for the Nadis Warriors, we’ll be hearing from them in the future… and we are.

Tiger & Woods – When we started booking this festival, as usual I put feelers out to our fanbase – What do you want to see? Who do you want us to book? And over and over again, the same two words kept coming up: Tiger. And Woods. So I took this as a cue that here was an act that I needed to check out, and when I did I was able to see what all the hype was about. And we immediately booked them for City Bisco.

Make sure you make it out early tomorrow and Saturday to support everyone who’s playing City Bisco – we’ve got a ton of fresh talent gracing the stage right from the start. Find the full schedule here and see you all there!