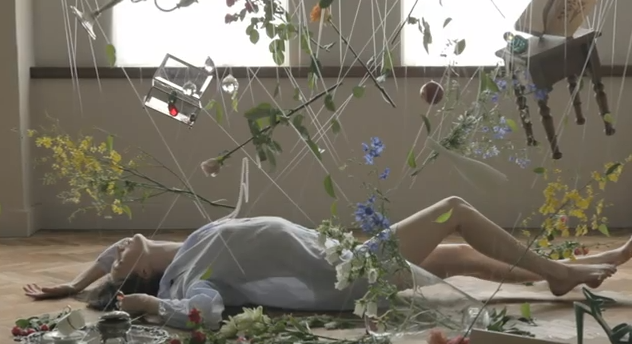 Unlocked: Find out more about the artwork on Sun Airway’s Soft Fall by N-A-M Creative Collective

In our interview with Jon Barthmus of Sun Airway yesterday, we talked about the band’s visual sensibility and the stunning album sleeve photographs by Tokyo art collective N-A-M. With its sophomore album Soft Fall out this week and a homecoming show happening at Voyeur tonight, the band released a making-of video showing the preparation and staging of the shoot. Here’s how Barthmus described it:

I didn’t realize when I contacted them how labor intensive it all was It was like a thirty-hour shoot ‘cause they actually hang all those wires—and they tie a leaf to a wire and hang it up, and they do that hundreds of times. And there’s a dozen people all doing this at the same time. Then they set it up and bring in the model and take the picture and that’s it. There’s no crazy computer trickery, which is kind of what I assumed it all was. What you see in the photo actually happened.

Check out the video below, and dig deeper into Fantasy and Reality – N-A-M’s series that inspired the cover – at this Huffington Post gallery, look at more of the collective’s work at its website and get information and tickets for tonight’s Sun Airway appearance at Making Time here.

Soft Fall is the featured album in this edition of Unlocked; hear the spotlighted single “Close” in Monday’s post, read Tuesday’s album review; watch the “Wild Palms” video in Wednesday’s post, read my interview with Jon Barthmus from yesterday. And stay tuned to The Key for future album spotlights on Unlocked.