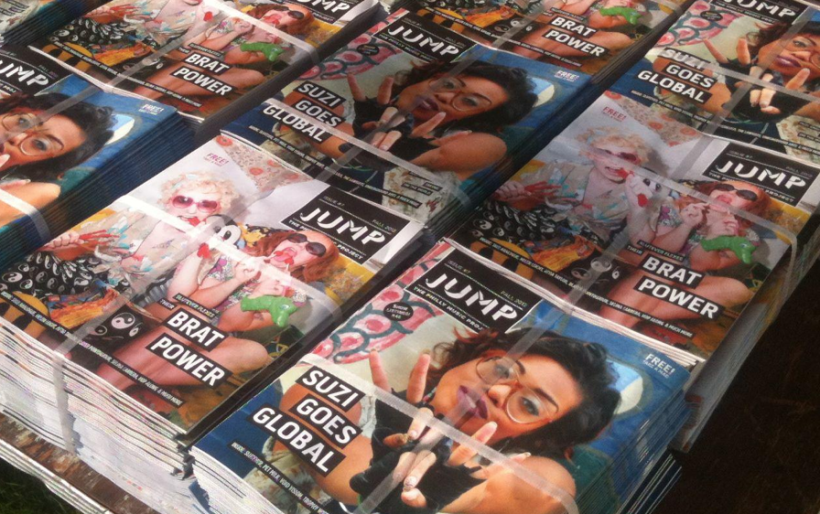 As we move headlong into winter, PhilaMOCA keeps the Tuesday Tune-Out home fires burning, with a month of weekly shows curated by JUMP Philly beginning tonight.

When the quarterly magazine launched in 2011, I immediately dug what it was doing. For a media outlet covering the Philadelphia music scene, it was spotlighting all the right artists, and in an impressive range of genres – its writers crawled around in basement-show punk dives one minute, visited classical music halls the next, explored secretive hip-hop cyphers the next. Doing so as a print medium was all the more admirable, and I’m pleased to welcome editor and publisher G.W. Miller III to this space to share what he’s and the crew have planned for November. All events are at PhilaMOCA (531 N. 12th Street), start at 7:30pm and are $5.

From George:
If you haven’t seen JUMP mag around, hit us up (jumpphilly@gmail.com) and we’ll get you a few copies. We print quarterly, and we only document the Philly music scene. We have a new issue dropping in a few weeks, so we’re pretty excited to be curating the Tuesday Tune-Out series this month.

If all goes well, by the time our portion of this great music and movies series begins, the presidential election will be over (the voting at least) and the world will return to normal. No more annoying campaign advertisements on TV means I can actually turn my TV back on. Whew.

To celebrate, we invited Chalk & The Beige Americans to perform. These guys have a great Philly sound – full of funk and soul, though they can’t easily be classified in a musical genre. It’s definitely a groove, and the band is known for improvising, jazz-like, during performances. (Check out the story we wrote about the band in 2011 here.)

We found these guys last year after they did this video/song with Chill Moody. The bass line was so addictive and the rhyme style so old school. Listen to the lyrics and you hear that these guys just love hip-hop.

The Astronauts are actually a collective, with Pace-O Beats and Mont Brown as the principals. Pace and Mont are just a couple of smart kids from Southwest Philly. They named themselves after Guy Bluford, a West Philly native who overcame many obstacles and became the first African-American astronaut to enter space.

It’s hard not to root for these guys. The film we’ll present on this night is Tailor Made: The Bucky Davis Story. It’s a locally-produced documentary about Mont’s father, who was involved in Philly’s ultra-violent drug cartel, the Junior Black Mafia.

(Read the story we did about The Astronauts in the summer 2012 issue here.)

This is our official winter issue launch party and we’re thrilled to have Blonde Gang, the issue’s cover artists, performing. These guys are another collective and their styles run the gamut – from dance tracks to more rap-oriented hip-hop. When these guys perform though, things get wild. They are bright and colorful and they get the crowd into the action.

DJ Lisa Love is a longtime DJ who spins and scratches like the old days. And she’s a great story – a Southwest Philly girl who overcame struggles and went on to DJ for the likes of Jill Scott, LL Cool J, Musiq Soulchild and others. She also runs a DJ school, and she’ll bring one of her young protégés to spin.

This will be your chance to grab a copy of the winter issue of JUMP, which is loaded with good stuff. It’s our annual visual issue and we have stories about Keith Greiman from Prowler, DJ PHSH, Harsh Vibes, The Downtown Club, Sunny Ali & The Kid, DJ Damage, Modern Inventors, Band Name, Norwegian Arms, Tutlie and much, much more.

We’ll be presenting the sequel to an 80s breakdancing classic as well, so you really have four reasons to attend.

(Here’s the story we did about Lisa Love.)

These guys recently recorded a new album, set to drop in late January. They’re an indie rock band, I guess, but their music is all over the place. Some of their newer stuff has a real 80s post-punk feel, which is pretty awesome. Everything they do is loaded with energy and you will dance.

In addition to showing a late 70s cult classic, we’ll also be presenting two episodes of the locally produced Sadie, a web series produced by Nicole Agostino. The show features a young woman who sneaks into music shows around Philly and stumbles across adventures, romantic and otherwise. Most of the soundtrack for the show features local artists.