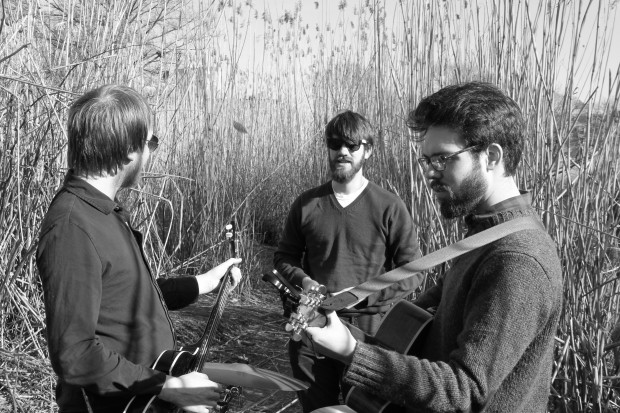 Maine, to quote The Milkman’s Union, is an anomaly.  Geographically, it is about as accessible as a Wolf Eyes album.  The winter lasts 8 months or so, but those who make it through get one of the more rewarding and splendid summers around.  Shared suffering through the pretty brutal winters knits the community tighter.  The result, musically, is a dense population of thoughtful, composed and committed songwriters, some with big aspirations, and others contented in their situation.   The Portland, ME music scene has seemingly come out of nowhere, despite all of the challenges against it, to rival scenes twice their size.  One of the many achingly under-known artists is The Milkman’s Union, who are the sum of three especially talented musicians.  They each are extremely invigorated and humbled by their predecessors, but have an exciting, folk-rooted sound all their own.  With the band in town tonight for a show at Kung Fu Necktie, we talked to The Milkman’s Union about the internet making the world smaller, Hegel, and being a rapper trapped in a folk singers body.

The Key: Hey, Where are you?

Henry Jamison: We’re in Cincinnati, we have nothing to do.

TK:Have you had Cincinnati chili?

HJ: We did last night, we had it on hot dogs…….Are we done here?

TK: Do you guys enjoy the weather in Portland?

Peter McLaughlin: There are things about the weather in Portland that are impossible to like.  I would say that the changing of the seasons is something I have liked. I don’t like that it can range in temperature by about 45 degrees and have three different types of precipitation in 24 hours.  But generally I like the weather as a package deal over the year.

HJ: Well, it gets very dark and I get very sad, but it is probably a good thing for me.

TK: Does the weather affect the music you make?

HJ: Yeah, in that is makes me sad.

PM: Winter is a good time to huddle inside and be creative and morose.

TK: What is the biggest challenge to the music scene?

PM: You know it is an incredibly vibrant scene, and there is so much incredible music that has the possibility to be well received on a national level, but like a lot of small cities it can be really insular, and a lot of folks don’t get outside of Maine.  Maybe some don’t know how to, or don’t quite know how to promote themselves, and some, quite frankly, just don’t have the ambition.  I have some good friends in Portland that make incredible music and could be successful in a big way, but have no desire to do that really, they are happy making music for themselves and their small community of friends and some fans.  But I guess where I was getting to was that the challenge is getting out of Portland because it is so supportive and it is so easy to feel contented inside of it, but on the other hand some people just may not want that [success].

TK: Do you think you need to move in order to succeed?

PM: I don’t think we have to go anywhere, obviously it has been said a million times the way in which the internet changed the music scene; you don’t have to be in New York, or LA or Chicago, it feels like you can kind of do it from anywhere.  I think I had one experience this tour that was encouraging, when we were passing through Eau Claire, a friend of ours from a band that we’ve been playing with in Eau Claire was recording at Justin Vernon’s home studio, so we go by and check out his studio, and he is, you know, a Grammy winner who grew up in Eau Claire and is still in Eau Claire and is still incredibly involved in the local scene there and that was kind of encouraging to see that, to see somebody who has gotten big success from a small town.  Eau Claire is actually even smaller than Portland in a lot of ways.  It might be close to the same population wise but that whole area is smaller than the whole Portland area.

HJ: Well One other thing that may be somewhat disheartening about that, is that he didn’t break until he was 30, and I hear a lot of people who say you don’t break until 30 so I don’t know if there is something that accelerates it about being in NY or LA, but it is kind of hard to look that far away and just keep picking at it and hope that we get a break, but that might not happen, and if it does it may be in a decade.

PM: On the other hand, it also seems like in the bigger cities it is easier to get lost.  It is easier to make connections, but easier to mean less as an entity, so there are positives and negatives to both the small cities and big cities.

TK: Do you have an explanation for why the scene has expanded in the way it has?

PM: I don’t know that I do. I speak of it often, but it is kind of an anomaly, it is kind of an incredible thing that has happened in Portland.  There is just an unbelievable arts and music scene in this city that is very small, and that has been reinforced on this tour going to other cities that are of similar sizes that have no where near the amount of activity that we have in Portland

HJ: Yeah, or other bigger cities.  I don’t know, you asked about the weather, I suppose there is something to that, although a lot of places are cold and shitty.  But the decision to stick it out, there is something to it.  It is sort of like a pressure cooker, no one is terribly content, and that pushes them to music.

TK: What are some bands from Maine that are important to you?

PM: Some of the bands from Maine that are big to me would be Big Blood, which is a band formed from the ashes of two other very successful kinda out there folk groups Fire on Fire and Cerberus Shoal, and Big Blood had a following in Europe that was probably bigger than any band in Portland, and it was this inexplicable rabid cult fan base despite the fact that they don’t promote themselves in anyways shape or form.  And then another band we have been closely intertwined with is Butcher Boy, a year or so ago I probably would have told you that they were a straight up folk punk band with all kinds of spastic and free jazzy tendencies, but they have changed a lot over the past year.  It is still rooted in folk music, but it is really dark and doomy and spacy and really great and powerful music. And I am going to offer one more, a songwriter who goes by Lisa/Liza who writes pretty unbelievable songs, and she just put out an a new album that is incredibly good.

HJ: I would just say Jared Fairfield.  He used to make this beautiful pastoral folk-pop and now he makes sort of club jams.

TK: Hah, are you being serious?

HJ: Yeah, I am serious

TK: Oh, okay, that almost sounds like a joke.

HJ: It almost is a joke.

TK: Is there a house scene in Portland?

PM: Butcher Boy, a lot of them, live in a house on Poland street so they just call it Poland Street. And they have shows in their basement. There are a couple places still going.  Poland Street is by far the most active and it is a really great place for anything left of center.  Like most cities, the house scene is kind of shape shifting.  I wouldn’t say we have the most active and vibrant house show scene, but Poland Street does a ton and they have been a really awesome DIY venue for the past 2 years or so and they have really kept that going because the people who lives there really cares about it, and that’s been a really awesome place to have in Portland.

TK: Henry, what, if any, writers are influential to you.

HJ: I feel like I’m really more influenced by reading than music in a strange sense and I don’t know how it influences the music of things, but lyrically, sometimes I just straight up rip off poets. Galway Kinnel and [W.H.] Auden. I but honestly I don’t read much poetry, I read a lot more philosophy and then once and a while I read a novel but actually I haven’t been reading much at all lately so it is hard to say but Thomas Mann and my boy is Hegel.

TK: Do you write lyrics after the song is written?

HJ: Up until recently I was writing the lyrics at the exact same time which tends to compromise them because I think ‘oh well this is just a place holder’ and then they just stick around.  But recently I have been writing a bunch of Dylan-y couplets and once and I while I am drunk and I just write a bunch and go over them in my head over and over.

TK: Are their any hip-hop artists who inform your lyrics?

HJ: Well, Lil Wayne was sort of ridiculously huge for me for whatever reason, and I didn’t listen to hip-hop for about two years, then I started listening to Drake somewhat ironically, but I think that is personally why I have been writing so many couplets. I can’t become a rapper, but when I go over the lyrics in my head I am not singing the lyrics, it is basically rap. The lyrics that I have written recently have been more personal, in the sense that I say ‘This is what I did, then I did that.’

TK: Henry, I read that your dad did composing?

HJ: He does still, yeah.

TK: Has that influenced your songwriting at all?

HJ: Only in a way I can’t explain.  He didn’t teach me theory or anything.  He sort of tried to make me practice viola but we sang a lot, and he past down his genes or whatever. I listened to The Beatles a lot because of him.  It is hard to say, although he started in classical world and he’s marrying this folk tradition of rural singing in a style called shape note singing and he is marrying that to his more sophisticated counter point I would say.  I was in a chorus that he wrote for Folk Village Harmony out of Vermont that definitely influenced me basically more than anything, a lot of my lyrics harken back to the more stoic lines from those songs.

TK: When can we expect your new ‘Golden Room’ EP?

PM: Probably within the next 2 months it will be available.

TK: Do you have a label?

PM: No, we are self-releasing it.

PM: Money.  We are just figuring out a lot of things.  We are going to be launching a PledgeMusic, kind of like Kickstarter.  We wanted to get it out before tour but there were so many things, and we had waited so long to put out anything new, so we just wanted to make sure we do it right. We wanted to line up a good press campaign and get it out to as many people as we possibly can because we feel strongly about this record and we are proud of it and we want to make sure we do as much for it as we possibly can.

The Milkman’s Union plays at Kung Fu Necktie tonight with Chamberlin and Song Dogs and the Nightjar. The 21+ show begins at 8 p.m., tickets and information are available here.