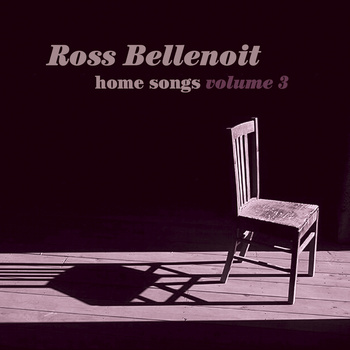 As a guitarist, Ross Bellenoit is a true expressionist. From spacey solos to smart tones, textures and accents, he’s worked with performers like Birdie Busch and The Sweetback Sisters to transform their music from “singer-songwriter” into so much more. So it’s interesting to approach him as a solo artist in his own right – what kinds of songs will he sing, and write? Will they be drifty, dreamy and epic, or will he mix in brash rockers, or contemplative strummers?

This week, Bellenoit celebrates the completion of his Home Songs trilogy, a series of three EPs he’s self-released since the spring. And as we wrap up listening to Volume 3, and reflect back on Volumes 2 and 1, it becomes clear: Bellenoit does all of the above.

If you had to characterize this set, it would be his late night at the rock-and-roll bar. Opening with a punchy, jagged cover of Richard and Linda Thompson’s classic “I Want To See The Bright Lights Tonight,” Bellenoit jumps immediately into the single “Down To One” – which we heard yesterday as the featured download in this week’s UNLOCKED. Loosely a musical homage to “One” by Harry Nilsson, it also rocks a vocal melody similar to classic Elliott Smith or, digging even further back, The Beatles. Lyrically, it’s a study of trends and dubious trendsetters with chameleon identities: “The minds you’re deceiving are close to believing that they could be the new renegade.” So is he taking a critical character study of Nilsson himself here, or talking more generally to folks who overstep the bounds of the collaborator / producer role he so cherishes? It’s unclear, and the compelling lyrical mystery shows that Bellenoit’s skill lies in telling stories and studying characters as much as his slinging his six-string.

But Bellenoit does explore different roles himself; Volume 2 of Home Songs shows us his country and western alter ego. Opener “When I Leave” is a pedal steel part and a southern accent away from a Louvin Brothers song, while “Your Face” is his waltzy Gene Autry moment. Digging further back to Volume 1, the music feels more lo-fi, homegrown and personal. “To Be Free” has a bopping handclap groove and a scatchy kitchen-table soul vibe to it, maybe akin to early Spoon, Meanwhile, he acknowledges the debt the pensive “Lockless Heart” owes to XTC with its unusual, evocative chord changes. The latter song has a padded, soft, recorded-in-my-living-room sound…which it was, sort of. Hence the Home Songs moniker. These are recordings that were made at his house between 2009 and 2011, and then fleshed out with overdubs at South Philly’s Turtle Studios.

The new EP is the most sophisticated of the batch in terms of production, but from its fierce opening, it plays out in a progression of melodic numbers with restrained temperaments – beginning with the more traditionally singer-songwriter stylings of “Sink or Swim.” Slightly different instrumentation might have made the melancholic-yet-poppy “On Your Own” a Browdway musical set piece, while “Twisted Phrase” is a pensive fingerpicked number with hushed, shuffling brush drums that don’t enter for a minute, then bring the set to a quiet close.

If there’s a downshot here, it’s that Volume Three announces itself as the rocker, the voluminous finale, and then halfway through cuts the power to leave delicate piano and wistful singing. But it wasn’t necessarily intended to be heard as an individual work, just like book three of a serial novel would not be meant to be read without the context of books one and two. Bellenoit structured this set not as a standalone collection, but the denouement in a larger work. And each volume ends up flush with those midtempo moments, the breezy compositions that are Bellenoit’s bread and butter, enrichend by each set’s distinctive excursions. It will be interesting to see how Bellenoit proceeds when he goes back to having only one canvas to work with, instead of three. But as Home Songs shows, not only is he a whiz at playing, he has no problem thinking big.

Home Songs Volumes 1 – 3 is the featured album in this edition of Unlocked; hear the spotlighted single “Down to One” in yesterday’s post, and check back later in the week for interviews, video and more.