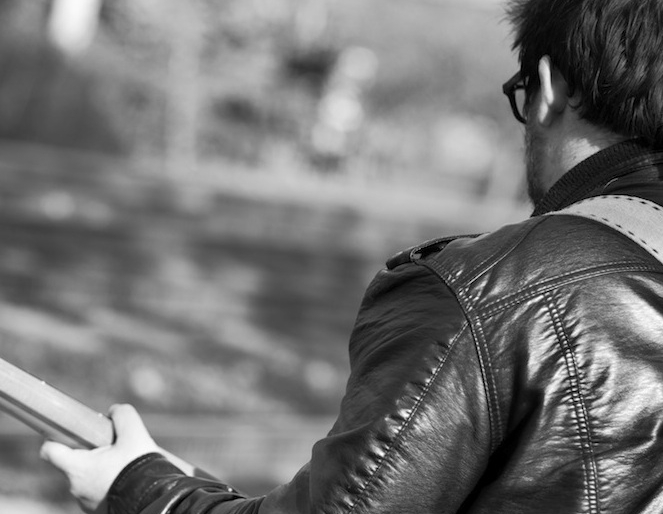 Unlocked: Ross Bellenoit on progressing from classical to rock to recording at home

He was trained in music in his native Boston, but Ross Bellenoit came into his own as a musician here in Philadelphia. When he arrived in town nearly ten years ago, he formed an early bond with a community of musicians based in South Philadelphia and was quickly enlisted to play guitar for many of them. Soon, he began playing for touring groups as well – like Brooklyn-based alt-folk combo The Sweetback Sisters – and in 2010, released his first collection of his own songwriting, Eight Track Mind. This year’s Home Songs series of EPs, which we’ve featured all week on Unlocked, show a tremendous growth in songwriting, production and overall style – which is interesting, considering that these songs are essentially demos recorded at home, with slight studio embellishments after the fact. Bellenoit and I grabbed lunch a couple weeks ago to talk about his growth, his process and parallels he has with a certain pop singer from Sweden.

The Key: With everything that you’re musically involved in, how do you find time for your solo stuff in the midst of all that?

Ross Bellenot: I find myself consciously having to make time to do it. It’s actually really interesting lately, for the past maybe like six months, because I’ve been not on the road anymore. And when I initially made that decision to not be on the road anymore, you know, I was like, “Great, I’ll have more time to focus on my own stuff.” It doesn’t quite work that way. I have to hustle a lot more than I was when I was on the road to sort of keep the same sort of level of income coming in. A lot of things have been taking up a lot more of my time, and I ended up delving into a lot of other projects, too – like Divers, and I started playing with Matt Landis’ group Minor Arcana, and Early Ape, I’ve been playing with those guys.

RB: So, yeah, it’s like, there’s been a lot of things on the plate. And, uh, I was hoping to have started recording the next full-length while all these EPs were being released. It’s been really hard to like set that time aside to make it happen. But, I’m always writing songsIt’s getting to the point where I have so much backlogged songs and material that just haven’t been recorded, let alone released or anything, that it’s been harder to keep writing more material because there’s just like—there’s too much I need to get out first to sort of clear my head and focus on new things.

TK:Did you always know that you wanted to write songs? Or was there this point of realization where you were like, “You know,  I want to do more than just write a guitar part, I want to write a full finished piece?”

RB: I didn’t ever think about writing songs. It wasn’t actually until I moved here. I had been playing guitar and in a couple bands, back in Massachusetts, and I wrote a lot of lyrics for this one band that I was in, but I wasn’t the singer. And that was just like a big sort of training ground as far as lyric writing.  And then it wasn’t ‘til I moved here, and then I met and started working with like John [Francis] and Devin [Greenwood] and Birdie [Busch] and all these people and I was like, “Oh.” Just watching them and what they do, it’s like “Wow.” You know? That’s really sort of like bringing something into the world that could move people. And so I started learning from them —Devin was a particularly big influence as a songwriter, and just being really creative with the subject matter and how to approach making records. But it wasn’t always there. Even since I was a kid, my interests shifted. I started classical guitar when I was eight, and I studied that for like ten years. I was like waaaay into classical music and opera—I wanted to be a conductor at one point, and I actually have a newspaper article that I conducted the Springfield’s Orchestra when I was twelve years old. It was pretty awesome, but my brother got me the Led Zeppelin songbook for Christmas this one year, and an electric guitar, and that was, you know, that was it.

RB: Never went back! But the actual writing of the songs—it was really directed inspired by moving here and getting into the scene. It’s also them exposing me to different songwriters and being like, “Check out what this guy does.”

TK:How did the Home Songs EPs come to be?

RB: Maybe a handful of the songs on the EPs were written while [my previous] first full-length record was getting made, um, so there’s like a little bit of crossover.  It was the first time also that I had the ability to demo—that’s how all these tracks started, they were just demos, they were just like, “Oh, look what I can do, Garage Band.” And then I started realizing, I could maybe spruce them up a bit, and release them. But something about a lot of these recordings—just from the process—is that the recordings were mostly created when the songs were first finished. Like, “I just finished this song,” or, “I just wrote this song, and I just made this demo, check this out.” The foundation was never really labored over, so I had to make sure things were right overall with each song in order for me to keep working on them.

TK: Sort of pinning the song down when it’s fresh.

RB: Yeah, ‘cause you can sort of just start spinning your wheels: “I don’t know about that bridge. That one word bugs me…” but you just kind of have to like surrender to the, like, that’s what it is, BAM! I have a decent enough editing process internally, so that when I do finish a song, it’s there. It’s there, and like there’s not much tweaking left to be made.

TK: Also, what about the setting, like recording it at home, like in your house? How does that compare to the studio?

RB: Well the difference is I am working completely by myself, whereas at Turtle I would be working with an engineer. I started when I got my MacBook, and I was like, “Oh, I can record music now,” but I just have like the little internal microphone. So I had to teach myself and my ears how to hear certain frequencies and how to work compressors, and all that sort of production stuff. Where, working with somebody else at Turtle, I just sort of trust that they take care of the engineering responsibilities—it takes a little more off my shoulders. When I’m like producing at Turtle, I think more about, “Is this song in the right key?” “Is this song in the right tempo?” “What’s happening with the arrangement?” Like, “How does the drummer feel?” Where if I’m at home, I’m thinking more sort about “How do you get that sound?” Or “How do you get that weird reverb on the kick drum?” I’d say about 30 to 40 percent of the extra tracks were recorded with just the internal microphone.

RB: It was really just like, “this is the collection of songs that I have.” And that’s kind of why I split them up as EPs, because I felt like I couldn’t whittle—I didn’t want to cut any of them. I was like, there’s eighteen songs, I don’t really want to get rid of any of them, they don’t all really work together as either like a full-length or as like, a split thing. The first one is kind of what I think is the most stylistically diverse, and then the second one has this sort of like folky, dreantm introspective quality to it. And the third one has this zesty kind of edge to it, you know? And that helped me put everything together. And I didn’t think about that when they were being made, it was just like, “Oh! This is the song I wrote this month.” Like the song “Down to One” on the third one—I’d never really listened to Harry Nelson before. I mean, I had checked him out a little bit, but I suddenly got like super fascinated and I spent like, two days, just like listening to his whole catalog, and I immediately wrote that song, and made the demo, that night, and I was like, “Oh, this is my little Harry Nelson song.”

TK:The other aspect of the EPs, being three releases staggered acrouss the course of a year, reminded me a bit of what pop singer Robyn did with her Body Talk EPs a couple years ago, were momentum built with each one. Do you think splitting it up and spacing it out gives you more of an opportunity to get into people’s consciousness than, like, “here’s an album,” and then “here’s another album” in a couple of years?

RB: Exactly. I can’t stand that. I feel nowadays, the key to really get any sort of momentum in starting your career is to be constantly putting stuff out. Like the older artists, the Springsteens, they can afford to take five or eight or whatever years to make their next record. But to really stay current and in people’s ears you have to be constantly releasing new stuff. Sort of like you’re like giving them all your options, to be like, “try this, try this, try this.” I’m really glad I did it this way. I think it helped. I even just released a single, between the second one and the last one. I don’t think anybody really heard it, but it was just like this song that I had, I was like, “this is one to put out there,” so I just put it out there. I think it’s a good idea, especially in the sort of younger stages of being an artist, to be giving as much as you can, putting as much out there as you can.

Home Songs Volumes 1 – 3 is the featured album in this edition of Unlocked; hear the spotlighted song “Down to One” in Monday’s post, read Tuesday’s album review; watch a music video for “Besides” in yesterday’s post and check back tomorrow for a genealogy of sorts showing who Ross has worked with, and when.