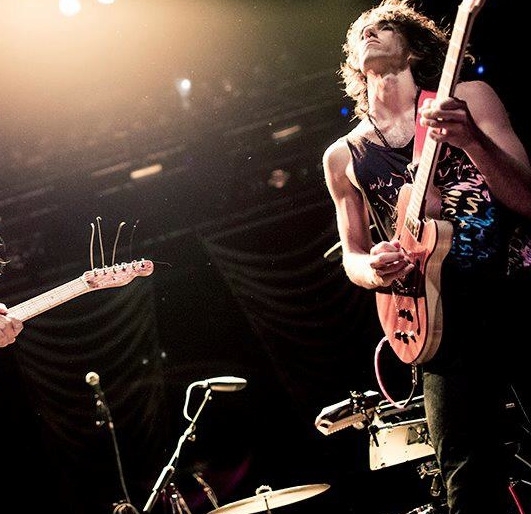 Interview: Finding another angle with Delicate Steve (playing PhilaMOCA with Banned Books on 12/2)

I can say what I want. I can say that Delicate Steve‘s layered harmonies give me a feeling that can’t be classified as “good” or “bad.” I can say that the New Jersey-bred group’s absence of lyrics puts it’s music on a different level. That before listening to this group, I really didn’t appreciate modern music without spoken word. I could even tell you that listening to the first three tracks on Positive Force consecutively is, to me, the equivalent of watching reruns of Little House on the Prairie in between games of Nintendo 64 and playing in the dirt in the wooded backyard of my kiddish days, sun shining through tree branches, not warm and not cold, carefree and childish.

I know, I know… only weird kids watched Little House on the Prairie. But then that’s why this all makes sense. I like odd things that hit me in my core for some inexplicable reason. I really felt for Mary Ingalls when she went blind, and I really feel “Wally Wilder,” the second track of Positive Force. The song starts in this kind, timid tone and ascends into this screeching, big band pop bubble that never fully explodes but you can feel the tension the whole time.

And that’s pretty much how the rest of the album plays out, as well.

Delicate Steve is methodical in its chaotic music making. The group jumps back and forth from song to song, creating highs and lows that jolt your brain juices–the serotonin, the endorphins, all that stuff–until you really don’t know what type of relationship your mind is having with your headphones. Is it healthy? Abusive? You’re confused, misunderstood. It’s wildly strange. It’s weird.

Even weirder: In 2011, pop-culture/music novelist Chuck Klosterman wrote Delicate Steve’s press release for Wondervision, the group’s first album. “His participation was through the label [Luaka Bop],” says Steve Marion, songwriter, “it was suggested as a way to stir things up, for him to write it without having heard our music at all.”

And it worked, because even NPR fell for bits and pieces of the hoax. “THE CRITICS UNILATERALLY CONCUR: DELICATE STEVE IS A BAND WHO CREATES MUSIC,” it started, going on to tell how the group was discovered in the parking lot of a New Jersey strip mall (they weren’t), and signed to Luaka after eating five plates of General Tso’s chicken (they didn’t), even providing false facts about each member.

“He kind of captured some kind of fragment of our personalities with each individual bio so it was really funny to read them all together,” Marion says of the supposedly fabricated bios, which include claims that Marion plays 40 instruments and keyboardist Mickey Sanchez is a horseback riding pastry chef.

This year, the group promoted its second album, Positive Force, by pinning tiny buttons that played music all throughout New York City. It was a scavenger hunt, and fans were encouraged to hop around the Apple with headphones in hand and listen to individual tracks from the new release.

“We’re trying to do things in a fun way as opposed to something that seems pretty standard, like streaming your record before it comes out. It used to be exciting, but now it’s kind of the norm. Because there are no lyrics to write about, you need another angle to help with doing write-ups and so it comes through the idea of trying to make it easy for whoever wants to talk [or write] about the band”

Delicate Steve plays PhilaMOCA December 2, a venue with somewhat of a bizarro history itself. It used be a showroom for tombstones and caskets and now it’s this rad DIY pace for shows and projector-driven movies. The group will play with Philly’s Banned Books, which will be a treat in itself considering the electro-riot group doesn’t play out very frequently.

I honestly can’t tell you what to expect out of this show. Melodies are going to range from beat up break dance riffs to serene, woody Disney-like soundtrack songs. You might be confused, startled, tingly, elated… and these are totally normal feelings (for weird kids like us).

Delicate Steve performs with Banned Books, Bad Braids and Arc in Round at PhilaMOCA, 531 North 12th St., on Sunday Dec. 2 at 7 p.m. Admission to the all-ages show is $10, more information here.