It is a problem that has plagued modern society. It has jolted you out of your sleep in worry and cold sweats. It has left you crippled with regret. It can literally ruin your night. It is the dreaded double booking. Two potentially dope concerts, one potentially dope night. Here on Double Booked, we’ll help make your decision between Everclear’s appearance at The Chameleon Club and New Found Glory’s appearance at The TLA easier by breaking down the two shows by category, and deciding which reigns supreme. Let’s do this.

This edition of Double Booked is nostalgically tinged, primed to give you the urge to dust off your old cd wallet, JNCO’s, and get back to the good old days.  Really though, those days were pretty humiliating in retrospect.  Sometimes, revisiting music that you grew up with can be fun while you reminisce, but it also can be disappointing, and filled with thoughts of,  ‘I can’t believe I listened to this’.

Everclear: I remember first watching that movie Loser, starring the pastry-violating ‘comic’ Jason Biggs, and thinking, this guys would love Everclear.  Don’t expect every person to be humping a pie at the concert, but watch where you step.  Alexakis and Co. have created a serious body of work for themselves, so expect a mix of people there who have followed the band their whole career, and those who really just want to hear ‘I Will Buy You a New Life.’ 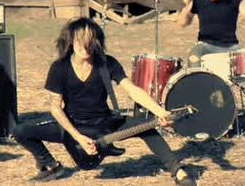 New Found Glory: New Found Glory is a rare breed of pop-punkers who have stayed active from their heyday in the early 00’s up until the current resurgence. A number of their peers have been existing by breaking up and reuniting ad nauseam, where as New Found Glory has (unfortunately?) decided to stick it out and continue to make music for teenagers despite being well into their thirties. The crowd, then? Probably a bunch of teenagers, and thirty year olds who wish they were still teenagers, holding on to every last strand of youth they have by reliving the ‘golden years’ when Adam Lazzara and Jesse Lacey were Gods and CrabCore didn’t exist.

Verdict:  We are going with a Tie on this one, because they both sound pretty terrible.

Will They Be Back Soon?:

Everclear: Alexakis reformed the band in 2009, recruiting mostly new players, and jumping into recording for the first time in about five years.  They just released their eighth studio album, and first in six years called Invisible Stars. That is quite the hiatus, and there is no telling how long their next break will be, given that it all seems to rely on Alexakis’ whims.  To be honest, I never though there would be opportunity to see Everclear and Eve 6 separate, let alone together, in 2012, so you never know.

New Found Glory: This is somewhat of a loaded question for this instance. In all likelihood, yes, you will be able to see New Found Glory live until they rename themselves The New New Found Glory with only Cyrus, the original drummer, remaining in the lineup. This show, similar to 2010’s The 10 Year Anniversary of the Self-Titled Record Tour, is giving 2002’s Sticks and Stones the 10 year re-issue and related tour treatment. Unless NFG stick around to do 20-year anniversaries, this will probably be your only time to ‘mosh’ to “My Friends Over You” in its natural resting place.

Verdict: New Found Glory is doing the whole album thing, which by default, is a more rare experience.  Really, you can probably see both of these bands again soon though.

Everclear:  On So Much For The Afterglow, Everclear has a song called ‘One Hit Wonder,’ which was totally not about them at all.  Everclear is closer to a three to four hit wonder.  They are halfway to a ‘Best Of E.P.’.  So Much For The Afterglow was Everclear’s most commercially successful, but the album really is a good one. They have done some genre morphing, starting as a grungier rock group and ending in the pop game with homies Matchbox 20. They hit their sweet spot in between the two with So Much For The Afterglow, and the mainstream responded. I would be remiss not to mention their first single ‘Santa Monica’, which sounds like all the other Everclear singles and landed them an opening spot for the Foo Fighters.  Not a bad start. Having an eight album, 20 year spanning career is a rare commodity in music, and something that Alexakis should be proud of it… I think?  I am not sure if they gain or lose bonus points for having a song called ‘You Make Me Feel Like A Whore.’

New Found Glory:  Uh, well, they have a lot of Punk-Pop Cred?  They are basically royalty when they take part in Warped Tour, which is something.  They are stalwarts in a genre of ephemeral bands that break up and reform like a bunch of angsty nuclear reactions. They have seven albums, but their first three were special for helping in defining the genres sound and influencing countless bands to form or gain notoriety.  The genre has sprouted many terrifying sub–genres, but New Found Glory were a big part of the good old days.  Of course, that is just nostalgia speaking, but that the whole point of this tour, so mission accomplished. These Pop-Punk dinosaurs have been a band for SIXTEEN years.  It feels a big weird gushing about that after writing about Neil Young’s successes, but it is all relative.  These cats are in rarified air, and if there was a punk-pop hall of fame, these guys would be at the top of the ballot.

Verdict:Everclear takes the cake on this one, but mostly for that appearance in Loser.

Everclear:  EVE 6 IS OPENING THIS SHOW…I REPEAT…EVE 6 IS OPENING THIS SHOW. No, this is not a dream. No, I am not playing a cruel joke on you. This is actually happening, and your phone is correct, it is 2012.  Will people demand a refund if they don’t play ‘Inside Out’?  Is that song bigger than ‘Sex and Candy’ or ‘Brick’?  Neither of these questions will be answered at the show, because they will definitely play ‘Inside Out’, hopefully multiple times, and OMG I can’t believe this is actually happening.  Someone pinch me.

New Found Glory:  I am not sure who these openers are, but more importantly they are NOT Eve 6.  That is really all that matters here.

Verdict:  If I can get an Eve 6 autograph, I might get a tattoo of it somewhere weird on my body.

The Winner:Everclear technically wins, but pick your poison, ladies and gentleman, you are about to go back in time.