Unlocked: Read The Key's review of Our Eyes are Peeled by The Fleeting Ends - WXPN | Vinyl At Heart 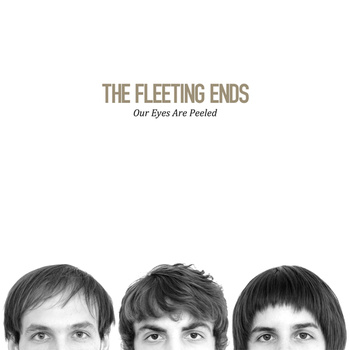 Unlocked: Read The Key’s review of Our Eyes are Peeled by The Fleeting Ends

Rock and pop bands don’t need to define themselves by their numbers. Look at groups like Jukebox the Ghost and fun. – they manage to sound epic while maintaining a minimum of cooks in the kitchen. Philly trio The Fleeting Ends incorporates this school of thought into their latest record, Our Eyes Are Peeled, which they’re releasing digitally and physically next month (you can stream a handful of songs at the band’s Soundcloud page).

For context, if you’re just being introduced to the band right now – these guys used to be a lot more raw. Bred just outside the city in Upper Darby, co-songwriters Matt Vantine (guitar, vocals) and Matt Amadio (drums, vocals) released a full-length and an EP of raw, skuzzy rock and roll with bassist Rusty Langley – total amped-up, power-trio stuff.

On their second full-length, produced by Tommy Joyner at MilkBoy Studio, the band’s sound opens up. It’s immediately noticeable in “Operator,” the track we spotlighted yesterday. The shuffling pop number is lead by ELO-style octave harmonies from the two Matts, and an airy violin lead arranged by Philly music legend Larry Gold. It’s a longing, sad song born of romantic confusion; Vantine’s husky Britt Daniel-esque delivery on it is one of many reasons The Fleeting Ends remind me of Spoon. Another is the way the band doesn’t accept the limitations of its size – this track, in addition to Gold’s superb orchestrations, is richly sound-designed with keyboards, splashy drums, and background noises winding up and slowing down.

As much as that sounds like a cinematic affair – and “Operator” is certainly a number that would fit right at home in any number of filmic / television scenarios – elsewhere on the album, the band does subtler things that still make it sound huge. On the driving “Poor Gloria,” a rhythm chord enters on the left speaker, Vantine’s lead guitar responds in the right speaker and Amadio’s bounding drums set the song in motion. It’s a brutish rocker about a character on the lam (in contrast to the poppy single), but it’s lively in quite the same way.

Somewhere in between is the chug-a-lug “Elaine (Until Now)”, another song with Gold’s string arrangements and nuanced synthesizer bits, but much more of an aggressive, barroom brawler tone. Think of it as Little Feat and The Band, by way of XTC and Blur.

Which, okay, let’s pause here to acknowledge that there’s no way of talking about The Fleeting Ends without talking about the myriad musical acts from the past 50 years that they call to mind. That’s another reason they make me think of Spoon (see! I just did it again), because they are so open and embracing of all the music that came before them that you can’t help but compare.

So the jangley, breezy, smooth tones of “I’m Like That” come across like the cool delivery of John Lennon informed by the vibes of Hall and Oats, soulful and heartbroken. “Floored” is a solitary Stones-y twanger about coping (“I didn’t want to know / but she had other plans, leaving with some other men / I just get so floored”). The album does a lot, musically, but comes together in a cohesive whole – which is why I think The Fleeting Ends avoid the dreaded “d-word.”

Critics like to call musicians “derivative” when their own work is easily aligned with the artists who influenced it. I’m as guilty of any other writer of doing this – and I do hope that nothing I wrote in the past stoked the fire of this album’s “Critics” – but let’s be real here. It’s virtually impossible to sound completely detached from the past when you’re up against a half-century of pop / rock songwriting. These guys embrace it, but do so without outright copycatting, and there’s the rub. With Our Eyes are Peeled, The Fleeting Ends recast that back-catalogue, projecting all the records they were reared on through their still-developing voice – and doing so, announce themselves in a big way.

Our Eyes are Peeled is the featured album in this edition of Unlocked; hear the spotlighted single “Operator” in yesterday’s post, and check back later in the week for interviews, video and more.