His band’s self-titled 2010 debut was a concept album about the string of arson events which had taken place in Coatesville. It was something Mascherino observed affecting his neighboring community, but didn’t directly impact his life.

In the case of Terrible Things’ latest EP, an abstract idea for a set of songs did become a reality for Mascherino.

He dreamed up a storyline following a husband whose wife was in the hospital battling a terminal illness. Mascherino thought about the differing viewpoints each song could address, from the doctors and the nurses to the physical struggle of the wife and the husband’s emotional one.

He had fully written “Hospital,” the final track on what became the band’s Pre-Trasmission EP when this musical concept Mascherino had created hit home.

“My wife actually went into the hospital during the recording process,” Mascherino said in a phone interview. “She was in there for a week, and it took them about four days to figure out what was wrong with her. It was just an infection, but it took four days where they told us that they knew nothing. That whole time, I just kept thinking why was I so stupid as to write about this as if it was a self-fulfilling prophesy? I can be superstitious at times.”

“It was just really bad because that whole four days they didn’t know what was wrong, and she was in pain,” he continued. “I sort of was in that position that I was writing about, which is something that you never want to be in. Luckily we got past it, and a few weeks later everything was fine.” 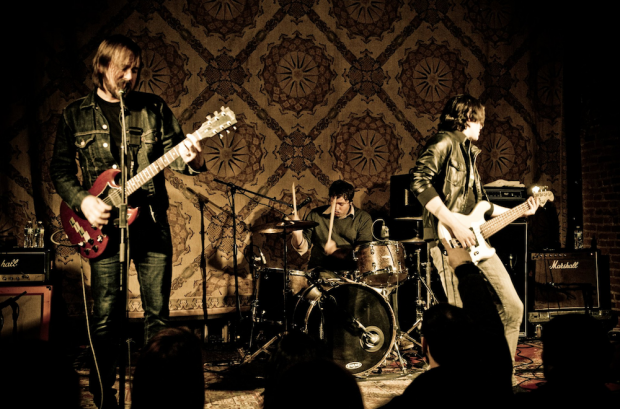 Just as Pre-Transmission (released digitally last Tuesday, in select stores this Tuesday) went from concept to real-life, its instrumental and lyrical diversions from Terrible Thing’s self-titled debut are both notable and fitting, considering how Mascherino began working on the album when his band was at a crossroads.

“It was literally just me,” Mascherino recalls of 2011, when drummer Josh Eppard and guitarist Andy Jackson left Terrible Things, followed soon after by bassist Brian Weaver. “It was like, I could either get new people that I don’t know anything about and try to make a record right away, or I could do this.”

The “this” Mascherino chose to do was write, record, and produce a record all on his own. In order to play every instrument on the album, he practiced playing drums every day for three months until he had blisters. Until he got the sound he wanted, Mascherino sought technical advice from Jason Elgin, who produced the first Terrible Things album, but had no help beyond that.

Mascherino wouldn’t let anyone hear what he was working on despite his history of collaborating with band members, including his stint as lead guitarist of popular alternative band Taking Back Sunday. He said working this way was challenging but necessary to get the results he wanted.

“Whenever you’re making art, it’s hard to shut out the outside noises of, not even pressure, but even your friends and what they’re listening to,” Mascherino said. “Someone could say the littlest thing, like ‘Oh, that song sounds like this band,’ and then you want to change it. I really wanted to try to make something in my own little vacuum.”

Macherino said writing and recording the album on his own led him to do some experimenting with different guitar tunings and soloing. He chose to let go of the “wall of sound” layering of past Terrible Things singles like “Up at Night” and “Revolution” in favor of sleek riffs he wrote on his double neck guitar.

The result is an old-school vibe on the album that Mascherino feels comes off “a little more real” and better highlights his guitar playing.

“I really love the sound of electric 12 strings,” he said. “They’re sort of a sound you don’t hear enough of anymore. It instantly brings you back to the 60s and 70s. … The way that I play has always been masked by this layering thing, and I wanted you to actually hear the way that I play guitar.”

When it came to releasing the record, Mascherino knew the EP he had created—with reoccurring phrases and themes, and songs that seamlessly ran together through its many intros and outros — would be best packaged as one continuous piece of music. He called this concept the “Unbroken Record,” and it’s why Pre-Transmission was pressed as a one-sided vinyl 12’’.

“Rock music wasn’t made for singles. I think that’s the pop set up,” Mascherino said. “If I had my way, I’d probably just release one track that’s 18 minutes long. … I feel like if you can go to another world for 18 minutes, and if a band can take you away and make you feel like you’ve escaped the world for that period of time, it’s so much more rewarding than just listening to a pop song for three and a half minutes. I have no interest in creating that ever again. I just think that’s where rock music needs to be. It needs to stop pretending that its hit pop music and get back to being an art form.”

Mascherino is enjoying the freedom to make his own decision, and create his own successes and failures. He’ll be joined in a live setting by bassist Aaron Van Allen and drummer Steve Curtiss, whom Mascherino worked with on former side project The Color Fred.
Mascherino said the band is excited about the future and has already been writing together. He and Curtiss stayed up until 4 a.m. the night Pre-Transmission got back from the pressing plant in order to self-mail the hundreds of pre-orders.

“We went out on our own putting this out ourselves. I have never done that before,” Mascherino said. “All of these things were new, and as it goes on it’s empowering to do it yourself. … Anything that we think of, we’re able to just do it at that moment. There is a lot of freedom in that.”