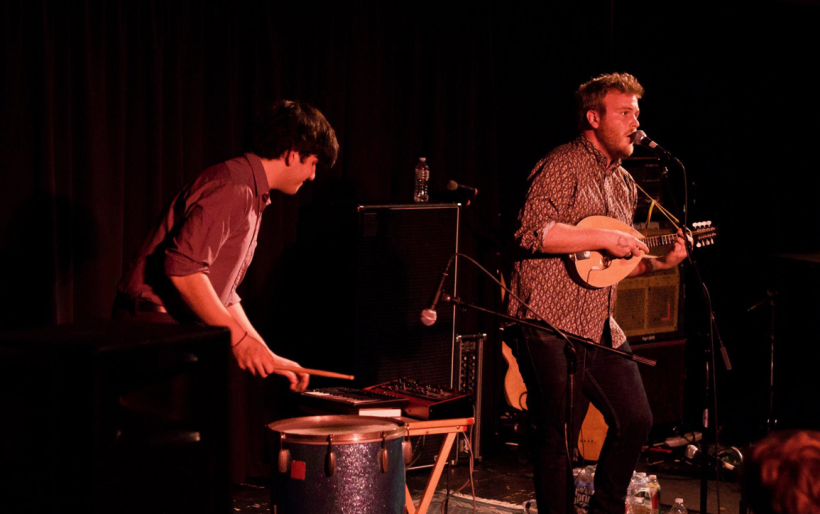 Just as I was getting ready to ring up Brendan Mulvihill of Norwegian Arms for our interview on Monday, a funny tweet from his account showed up. “Goodbye, obsession with Slavic literature. You’re looking fine, South American lit.” It got me wondering about this Philly songwriter’s relationship with his own time teaching in Eastern Europe and Russia, which inspired Wolf Like a Stray Dog, the album Norwegian Arms released this week which we’ve featured all week on Unlocked. Is it becoming a burden, having to continually revisit those feelings of loneliness and isolation? Is he ready to write new music about new surroundings? We talked about this, while drummer Eric Slick weighed in on the process of translating Mulvihill’s emotions to sound and evocative arranged music, and translating that even further to perform it live, like they will tomorrow at Johnny Brenda’s.

The Key: I got a kick out of that tweet you just posted. So are you saying you’re ready to move beyond Sibera?

Brendan Mulvihill: Ha, not exactly. I got to go to South America a couple times in the past two years, and as a cultural primer, I like to get into the literature. So I read a lot of stuff by Roberto Bolaño and Cesar Aira. Plus, there’s only so many depressing, super-heavy Slavic reads you want to go through before you’re ready to change gears.

TK: So, the songs on this new album – they were written while you lived in Russia, they’re a reaction to Russia. But is it a mistake to say they’re about Russia? Many of them seem universal.

BM: To me, a lot of them are more direct, very literal. But that’s because I know what specifically they’re about. I didn’t want to make it obsessively only about those things. Those experiences, emotional or whatever that I was going through, are universal experiences. So I approached it more from communicating the human experience, rather than the literal experience. It’s not so much intentionally ambiguous as much as I’d rather not have it be a narrative.

TK: The title track, “Wolf Like A Stray Dog,” is one song that’s definitely about being there, and the communication barrier. And you told me before that it’s actually about the stray dogs in Tomsk?

BM: Yes, over the year I kind of increasingly identified with them. The way they function in society was interesting – we don’t really have roaming packs of stray dogs in America, so that in itself was a new experience for me. They’re wild, for all intents and purposes they’re feral, but they’re also highly socialized. They have to socialize, they have to function within their pack, and they have to interact with humans to get food. So they’re nice, and people will be friendly to them but at the same time people kind of hate them. And myself, because I was still learning the language, I couldn’t necessarily communicate all my feelings with the people, but I still had to interact with them. And also, there was kind of a cultural thing where I felt slightly isolated. Here, I have been around long enough that I can surround myself with people of a similar mindset. There, it was harder to find people that defined a music scene, or an art scene. Even galleries, or things like that – they hadn’t really developed yet, or if they had, I wasn’t able to locate them in my time there. So I felt I had a hard time communicating with people where we no similar art or music or literary interests.

TK: Did you live abroad before that?

BM: I lived in Germany when I was in High School, and for an additional year in college. But really, it’s a very western – aside from a few minor differences, it’s culturally interchangeable. Russia appears on the surface to function similarly, but when you’re there, things are actually quite different.

TK: Eric, you weren’t there in Russia living with Brendan, but you have traveled a lot as a touring musician. Did your own experiences inform how you arranged the songs?

Eric Slick: I actually was in Russia at the same time as Brendan. He was in Tomsk, and I was in Perm on tour with Adrian Belew. We couldn’t coordinate meeting up together though. It was snowing, it would have taken Brendan a day and a half to get there and we couldn’t get it together. But yes, understanding homesickness, constant travel without lots of sleep definitely played into how I arranged the music. We went opposite route, where everything is upbeat and happy instead of downtrodden and depressed, which is how you typically feel in sub-zero weather. But it’s still tied into how Brendan felt, and that’s what you do when you arrange songs, you try to connect with the emotions the singer is putting across.

TK: How did they come together in the studio? I know you recorded with Michael Chadwick at Dr. Dog’s Meth Beach studio. Did he play a big part?

ES: Michael was sort of the filter at the end of it. I ended up playing guitar, bass, synth, marimba…the whole backup band for the record is pretty much just me. What Chadwick would eventually do is say “maybe that sound isn’t necessarily the right one for the song.” And we’d try and create something more appropriate, or scroll through patches find something that was a better fit. He ws really good at, if I was in a jam, telling me “Follow that idea all the way to the end” or “think of something else.” But we recorded it in only a week, so it was very crunched. We were putting in ten / twelve hour days in studio. I’d be like “Okay, time to play a bass part now. Time to play a keyboard part now.” If there are any regrets, it’s that I wish we had more time to sit with it and work on it like a full record.

TK: Talk about Norwegian Arms’ decision to go to that full sound from the very stripped down Trimmings of the Hides EP.

BM: Interestingly, two songs on that EP are songs I played before I left. “She Lives In A Secret Town” is the one song from that EP that I wrote in Russia – and at that point, it’s how we were playing them. We weren’t experimenting with arrangement. My friend Jose, who mixed this record was in town for a couple days, and he only had a four track. We had not a lot of time in space we were in, so we didn’t really think about adding too much to them. I overdubbed my vocals at home, and that was it. I would say the fidelity is intentional, I did see them as a real release, and not a demo. There was a surprising response online from people I never met, which is a very flattering experience.

TK: You also did the minimal percussion thing, the portable junkyard-style washtub setup. What spurred to go from that to the more traditional drumkit you use now?

ES: I think it happened out of necessity. I was breaking a lot of recycling bins and Rubbermaid buns, and ended up being costly. And more too, we didn’t want to be that gimmicky band that relied on trashcan percussion. If you pigeonhole yourself like that, you just become “that junkyard band,” and the scope of the project is wider than that. So now we’re going to make the drums sound like a Rubbermaid bin, but more inflection, with something that’s more familiar to people. And we get that a lot, that people miss the Rubbermaid bin, But we, added new member, made it more dynamic live. We learned a lot from the junkyard percussion thing, but having a real drumkit is a step in cool direction.

TK: Tell me about your new bandmate. Do they play bass?

ES: It’s actually Andy Molholt from Laser Background. He play synth bass with his left hand, plays one melody, and plays the other melody with synth on right hand, he harmonizes. It’s a good live representation of how the record sounds. And it’s still portable, still minimal, we can fit all the stuff in to a small sedan. We’re still very green, we don’t have a big carbon footprint.

Wolf Like A Stray Dog is the featured album in this edition of Unlocked; hear the spotlighted song “She Lives in a Secret Town” in Monday’s post, read Tuesday’s album review; watch a performance video of “Tired of Being Cold” in yesterday’s post and check back tomorrow for a overview of Mulvill’s Russia-centric artwork and writing.