An unexpected gig in the jazz scene can define a lineup. Impromptu sit-ins or sessions that seem as though they’re just for a night can be all that’s necessary to make some of the tightest improv music to come out.

That’s how it went for the Billy Martin and Wil Blades Duo. Martin, the drummer of the pair, was out west promoting his Life on Drums DVD when we he got an opportunity to play two nights with Blades at the Boom Boom Room in San Francisco with almost no advance notice. They didn’t have any music prepared, nothing rehearsed. The same was the case for their second gig, the New Orleans Jazz Festival in 2011.

“Everything we’ve done so far has been pretty impromptu,” says organist Wil Blades during a phone call from his Bay area home. “When we played Jazz Fest we really had a chemistry. There was never any time to prepare, we just go up and play some old soul tunes or other stuff that I’d play.”

After discovering that chemistry, both Blades and Martin knew they had a great thing going. They immediately booked a west coast tour for later in the year.

“Really, another duo wasn’t a gig I necessarily wanted,” says drummer Billy Martin over the phone after hiking the New Jersey Palisades on the Hudson River. “I was interested in pursuing other avenues like playing with more brass players and my band Wicked Knee. But playing in a duo breaks it down to the music’s most basic essence so it takes a lot of chemistry and personality. It doesn’t work with everybody but I couldn’t deny our chemistry, so I knew we had to keep this up.”

After only about six or seven shows, the duo had an opportunity to get into a friend of Blades’ studio at the Ex’pression College for Digital Arts near Berkley. Shimmy (Royal Potato Family) was laid down in merely seven hours. Both Martin and Blades say the session got a little hectic due to such tight time constraints (coming in on somewhat short notice, having a gig later that night). But being under the gun sparked the right jams and experimentation.

The 10-track record, which was released in May, is a perfect portrait of the rhythmic companionship between the two. Martin’s syncopated shuffling on “Deep in a Fried Pickle,” which came from an improvised jam while on tour, perfectly matches Blades’ quivering B-3 at the head of the tune. The knee-bending “Les and Eddie” was written by Blades, as was the feel-good opener, “Brother Bru,” prior to working with Martin. Both “Toe Thumb” and “Pick Pocket,” strutted their way onto Shimmy in only one take and were completely improvised in the studio.

“Nothing was more than two takes,” says Blades. “The record is very old school in that sense. It’s very, ‘whatever happens, happens.’ And it has all of its beauty and all of its warts there to see, it’s not perfect. There are minor mistakes, but it has a vibe and to me that’s important. When playing improvised, live music I like a raw kind of sound and I think Shimmy reflects that.”

Despite being an all instrumental record, they put a lot of consideration into how the album would flow together. And it shows. The album has two standards, Eddie Harris’ “Mean Greens” and “Down by the Riverside.” The latter being followed by “Toe Thumb,” is where the album reveals its peak before letting the listener down a bit more softly with its last three numbers. The first of which being the lax jam, “Little Shimmy,” that Blades says he felt just belonged towards the end. As for the brief, Blades-solo closer, “Dehna Hunu,” has even more meaning.

“Dehna Hunu means goodnight in Ethiopian,” says Blades. “I was recently in Ethiopia to play some gigs with this really great sax player namer Teodross Avery. His mother’s from Ethiopia and he has some musician friends over there that had a festival gig so we went out to play and do some workshops for a few days.”

Blades may have picked up a foreign tongue in Ethiopia, but he grew up a jazz head in Chicago. He says he was already familiar with Martin’s musical language from listening to his work with Medeski Martin and Wood, Martin’s gig he’s best known for.

But they are both versed in playing in duos. Notably, Martin released 2007’s Mago, an organ/drums record with John Medeski. And Blades makes up half of another duo with drummer Scott Amendola. 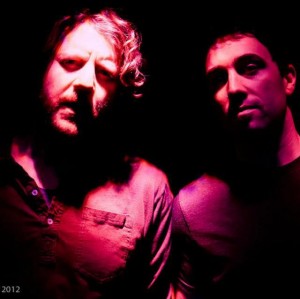 “One thing that’s great about a duo is that it essentially is a conversation,” says Blades. “But it’s kind of funny that I prefer duos because I’d say I’m generally more talkative as a person in a one-on-one setting rather than among a group of people. Yeah, melodic instruments give you more ideas as an organist, but in a duo it’s all on you so it’s really challenging.”

What makes Martin and Blades such a formidable pairing is that Blades grew up a drummer. He’s self-taught on organ and mentored by Dr. Lonnie Smith. Blades says thinking rhythmically first is a major part of his perception of music. Although, it’s probably his upbringing that aided his playing as a somewhat more traditional organist. He holds the low end down with his feet. The bass parts come from the organ’s pedals, which keeps more options available to him sonically by having both hands free to access his Hammond B3’s drawbars and manipulate its sound.

“It’s also a reason I play organ,” he says, “because playing organ with bass pedals takes a lot of coordination. So a drumming background helped me pick up the organ a lot quicker. Relatively speaking it’s made it easier.”

The duo has hit stops at jam festivals such as Florida’s Bear Creek Music Festival as well as smaller clubs like the Main Pub in Connecticut. Each live setting offers completely feelings for a jazz jam-leaning duo specifically. Blades says jazz clubs with everyone sitting at tables can sometimes feel a bit stiff, but that festival-goers can get lost in the party vibe, making it harder for a duo to work on certain textural ideas.

The textures Martin and Blades have been working on in more recent shows have been jamming with more of Martin’s extensive percussion arsenal. On Shimmy, Martin doesn’t stray too far away from his drum set and some tambourine work, but live he’s inclined to jam with Blades on a pandero and different shakers.

“Initially I didn’t bring any percussion out on tour,” Martin says. “But as I’ve brought more stuff into it, our playing is evolving already. I can see it in Wil’s playing too.”

Martin’s never been afraid of experimenting with new art forms. He recently scored the film, 7E, and has been beginning to work with a percussion ensemble of his own. These are a bit more involved endeavors to explore, but unlikely experimentation can make the original musical combinations more satisfying for an artist. But saying experimentation was a result of the organic chemistry between Blades and Martin might not be wrong either.

“Basically what it comes down to is that Wil has a certain voice when he plays,” Martin says. “A certain language that is not like anybody else’s. When we play together we have a very unique sound that we’re convinced no one else can sound like. So we just want to share that.”