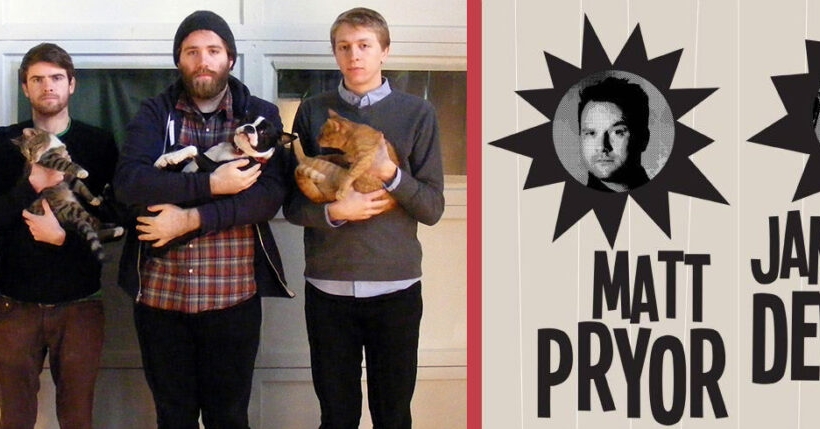 Double Booked: Everyone Everywhere vs. Matt Pryor and James Dewees

It is a problem that has plagued modern society. It has jolted you out of your sleep in worry and cold sweats. It has left you crippled with regret. It can literally ruin your night. It is the dreaded double booking. Two potentially dope concerts, one potentially dope night. Here on Double Booked, we’ll help make your decision easier by breaking down the two shows by category, and deciding which reigns supreme. Let’s do this.

This week we pit young guns Everyone Everywhere and their merry bunch of hooligans, who play at The Barbary tomorrow, against old emo fogies Matt Pryor (of The Get Up Kids and The New Amsterdams) and James Dewees (formerly of The Get Up Kids and Reggie And The Full Effect), who play North Star Bar. Who will reign supreme? Read and find out.

Everyone Everywhere: If you have seen Everyone Everywhere multiple times, you will probably know most of the people at the show, but if you have never gone to an Everyone Everywhere show, then you will not know anyone, but it will seem like everyone else knows each other. The bands playing are all friends, and probably a bunch of local band friends will be at this show bopping away in the crowd. This will have a familial feel to it, so if you hate your family, you may want to stay home. The All Ages show will ensure a plethora of hoodlums and whippersnappers, so wear your wallet in your front pocket. Expect moshing, whether you like it or not.

Matt Pryor and James Dewees: An elder generation of emo will come to this show to drink and be bitter. This is for the guys and girls who cringe when The Starting Line and Braid are mentioned together. My guess? I can imagine a lot of cool dads with full sleeves will be at this show. The bill is quietly stacked, so people who like to get a lot of bang for their buck are likely to appreciate this one. Also, people who enjoyed THIS album will also enjoy this show. This is all going down at a bar, so NO kids allowed, duh. Also, expect to see at least one Promise Ring shirt.

Verdict: The Everyone Everywhere show is just reeking of Birch Beer keg stands and kick flips. We choose this.

Will They Be Back Soon?

Everyone Everywhere: Well, they live in Philadelphia, so you would think their likelihood of playing nearby would be fairly high, but don’t be fooled, these cats keep their shows few and far between, except when they are in Europe. This show becomes more rare in that it is their record release show for their radical new, self-titled LP. Given the occasion, they will be selling the second pressing of their record in a name-your-price fashion, which they get bonus points for. More bonus points for their EE branded mugs, being sold exclusively at this show. The line-up is pretty similar to most of their shows, but their unparalleled enthusiasm for the merch makes this a pretty solid show.

Matt Pryor and James Dewees: All of these cats are music lifers. Matt Pryor has been playing in bands non-stop since the early 90’s, with James Dewees not far behind. Evan Weiss, the relative newcomer of the group, has possibly been in as many bands as the first two combined. So yeah, they will probably be back soon, and maybe with full bands in tow. I am not sure if they get bonus points for doing this intimate ‘stripped down’ show, or if they lose points for leaving the bands at home.

Verdict: Records are expensive to make! Everyone Everywhere is giving them away for free-ish! Who knows how long it will take them to make another one? If the Matt Pryor-James Dewees show was electric it would be no question, but it’s not.

Everyone Everywhere: This band has solid local clout, especially within the circuit of houses/venues/associated bands they play with. This young crew, I don’t want to assume, but may or may not have listened to any or all of the bands who are playing on the opposing bill tonight. They gain cred for putting out one of the better rock albums of last year, and they went to Europe!

Matt Pryor: This show is a Cred-a-palooza. Pryor and Dewees were responsible for one of the most influential second-wave emo acts to date, and years ago sealed their scene immortality. Pryor has over 15 LPs to date, between The Get Up Kids, The New Amsterdams, and…wait for it…his Kids Rock band The Terrible Twos. James Dewees played keys for New Found Glory and My Chemical Romance, and I think I saw Reggie and the Full Effect open for Fenix TX or something when I was in High School.

Verdict: Definitely Matt Pryor and Co. But he is a dad, and Everyone Everywhere are still in school.

Everyone Everywhere: A bunch of local friends with similar DIY ideals. Slingshot Dakota are fun with a capital F. They are like Mates Of State if they never sold out and had a kid. Glocca Mora is a powerful punk trio with earnest, gruff vocals and rollicking guitar work. Band Name are a surfy punk band who also have lots of fun.

Matt Pryor: This show is kind of a double headliner, but I am going to called James Dewees an opener, because he will most definitely play before Matt Pryor. If you have ever heard a Reggie and the Full Effect song, you may wonder what an unplugged version of those songs sound like. He probably has a bunch of stuff up his sleeve. Legitimately opening the show is Evan Weiss from Into It, Over It. Just last week he was on stage at Union Transfer with his old band Up Up Down Down Left Right Left Right B A Start. Besides that band, he was also in the highly influential but grossly understated band The Progress. Full disclosure: this band rocks. Into It, Over It, luckily picked up where The Progress left off, and playing shows on acoustic is what Evan almost always does, since the project is all him, all the time.

Verdict: Evan is great, but he can’t win this alone, were are going with a TIE.

Winner: We are going with our local homeboys Everyone Everywhere, but given that it is an All Ages show, maybe you can go to both?