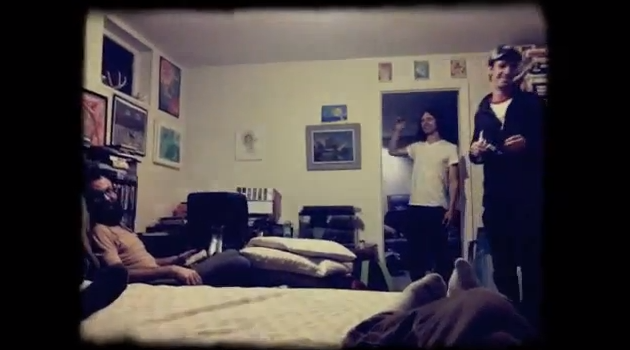 Unlocked: Get to know The Greatest Night in this montage of tour footage

All week, we’ve been exploring Birdie Busch and the Greatest Night on Unlocked, The Key’s regular series on new and significant releases from Philadelphia-area artists. Like we said at the beginning of the week, this is an album that’s less about Birdie the solo artist and more about – like the title says – Birdie and The Grestest Night, her band. (That’s bassist Todd Erk, guitarists Ross Bellenoit and Carl Cheeseman, keyboard player Craig Hendrix and drummer Thomas Bendel.)

In this montage of candid tour video, shot when the ban toured with Dr. Dog last year, we really get a peek at the personas among this group of friends – guitarist Ross Bellenoit, who joined them on this tour, mugs for the camera. Erk teases Busch with party masks. Busch drives the van. They whole gang settles in to share a couch and inflatable matress. It’s set to “Penny Arcade,” a fantastic track from her 2009 offering Pattern of Saturn. Watch it below, and catch Busch and band tonight at Johnny Brenda‘s for the 2013 Philly Opry. (Busch also plays an instrumental set with Greatest Night guitarist Carl Cheeseman at The Key’s Tuesday Tune-Out at PhilaMOCA on January 22.)