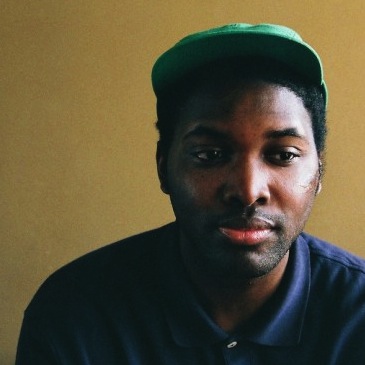 Dorian Duvall, also known as ONUINU, makes cerebral electro-dance pop in Portland, OR. Last week, while visiting the left coast, I ran into him and made him pinky-swear that he’d chat with me before his show at Kung Fu Necktie this Friday. I guess that’s not totally true. There was no pinky-swearing, but the running into, that’s quite literal. It was 2 a.m. at a bar, a long night, and I wasn’t my usual graceful self. Pleased to say it didn’t deter him. We caught up on the phone this week to talk about Portland, pizza and pressure to entertain.

Where are you right now?
I’m on my way to Rochester, NY, then Cambridge, Brooklyn and then Philly.

And this is your fourth tour as ONUINU?
Yeah, this is the fourth tour and the first headlining tour. I recently went on tour with STRFKR. This time, I’m playing solo, which is something I’ve always wanted to do. I’ve been kind of sick lately, but I have two buddies with me and they keep me company and help me out. Everything’s all good.

Do you prefer performing by yourself or with others, a backing band?
I definitely want a band but all of my friends are flaky as shit and I can’t rely on any of them and they can’t rely on me either, but it’s all good. It’s going to change after this tour. I [sometimes] have a drummer and a keyboard/guitar player. I think I might add another member. I feel a lot of pressure to entertain when I’m playing by myself. I haven’t done it in awhile and I’m getting used to it again on this tour. I get really tired after going on stage, and plus when you’re headlining the show is completely over by the time you’re finished.

Tell me about the album name, Mirror Gazers.
My buddy and I were just talking and he was frustrated with the whole (Portland music) scene. He thought it was full of a bunch of “mirror gazers” and so I took it from that. It can also mean self reflection, it doesn’t necessarily have to have a negative connotation attached, I just thought it sounded cool and very self reflective.

What was the recording process like?
I personally would have rather done it alone, in my own space. I don’t really like going to studios and recording because it costs a lot of money and you’re kind of rushed, you have to do something pretty fast because there’s time restraints. In a perfect world, I would have enough equipment to make everything sound good and do it in my own personal space and whenever I needed help mixing or mastering I would find someone for that.

For me, writing is one process and reading aloud sometimes changes my writing into a different animal. Does that happen when you play your recordings live?
It’s totally cool to play new shit live and see what works and what doesn’t. Playing live, you definitely notice how the crowd reacts to different things and at the same time it’s weird to change the music because of that, because you’re looking at it from a purely live aspect, and just because people aren’t dancing doesn’t mean they’re not digging it.

How does your audience typically react to your live show?
People dance and people sometimes yell shit at me. Some dude told me I was being awkward, but I think he was just fucking with me because I was playing the [“Always Awkward”] song. On the last tour, we played a show in Bellingham, WA and there were these kids climbing onto the stage and ripping the chords from the monitors. Security had to come and get them down. It was pretty awesome.

If you added another member, what would he play?
Probably play keyboard.

No, I can only stand there and tell them what to do and where to go. We’ve got a club here called the Trestle Inn, and they have go-go dancers. Maybe they’ll work for free.
We also need a place to stay.

And what other accommodations will you be needing?
A couch, a bed, pretty girls, Advil. Oh yeah, and some booze and coffee.

Won’t you also need food?
Yeah, I like rice bowls and teriyaki sauce and chicken and vegetables.

That might be hard. The venue you’re playing, Kung Fu Necktie, is in kind of the Irish-y part of town.
Kung Fu is in the Irish district?

Yeah, well kind of. But there is a pizza museum that’s pretty close.
I don’t like pizza, it’s just bread and cheese… and sauce.

WHAT? Are you super healthy or something?
No, I don’t think so. I eat fast food. I smoke.

Sometimes I smoke a cigarette after I leave the gym.
You smoke after the gym? What? Well I guess I don’t even go to the gym. I skateboard though. I think the last time I saw you I had my skateboard.

You should check out Love Park while you’re here.
I don’t skate too much but I do to get around the city. I have heard of Love Park, though.

Suggested prep songs include “Mirror Gazer” and “Always Awkward,” both off of the king of dicsco-hop’s debut LP, Mirror Gazer. The show starts at 7:30 pm, but impromptu backup dancers are encouraged to come early.  Anyone with an extra couch, bed or chicken teriyaki rice bowl is extra-invited.