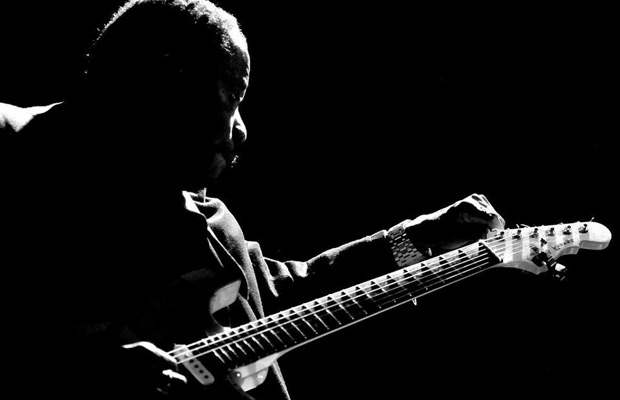 Complex Magazine this morning reported that Philadelphia guitarist Jef Lee Johnson passed away overnight. Over the course of his career, the versatile musician dabbled in jazz with legendary local pianist McCoy Tyner (and more recently, the George Duke Quintet), played funk’d up R&B with D’Angelo and hiphop with The Roots and Common, worked with eclectic singer Esperanza Spalding – even sat in with the Late Night with David Letterman house band in the 1980s.

Johnson’s career stretches back to the late 70s, when he performed with gospel bandleader Rev. James Cleveland. He soon branched out, working with a variety of local and national names who today are mourning his passing. On Twitter, Questlove of The Roots called Johnson “the unsung master.” “This man was a gem of a musician,” he wrote. “GEM!” Producer Ritz Reynolds referred to Johnson as a “guitar god” while King Britt shared a video of him playing the Jazz Bridge neighborhood concert series in Collingswood, NJ, where he discusses jazz music and plays his songs “Ain’t Seen Irene” and “Black and Loud” – the latter interpolates passages from Jimi Hendrix, Les McCann and George Benson.

“This totally captures his personality and gift to the world,” Britt wrote. “Thank you.”

Reports differ as to his exact age, but he was 53 or 54; the cause of death is unknown. For more on Johnson, read this 2010 interview with Philadelphia City Paper‘s A.D. Amarosi, and this interview on the Undercover Black Man blog. They reveal that, while friends and fellow musicians wish he had become more of a household name, fame was never Johnson’s motive.

Recalling a New York engagement in 2007, he said “We got our first-ever standing ovation at the end of one of the gigs. So we are doing something that people are feeling. And that’s all I’m concerned about.

“If I can make a little money, that’s a bonus. But if we’re not playing the music right, that’s my main concern.”

Tune in to the Philly Local Show tonight on 88.5 FM in Philadelphia or XPN.org worldwide for Helen Leicht’s tribute to Jef Lee Johnson.